By Heather Iacobacci-Miller March 24, 2011
Perfect Running Day
Today started off much cooler than yesterday - 45 instead of 65. And the high only hit 60 today. So much for the 80-degree temps. I debated with myself most of the day about hitting the gym for weights or heading out for a run. I decided to go with the run today and will hit the weights tomorrow.

I am so glad I opted for the run. The weather was absolutely perfect. The wind had died down, it was just enough to keep you from over-heating, but not so much you felt like you were fighting to run.

However, I ended up over-dressing wearing capris, sports bra, and a light long-sleeved shirt. I have, however, become very adept at undressing mid-run. No stopping, not faltering. It's quite impressive actually. After I took the long-sleeved top off and tied it around my waist, I felt golden. I had one of those "I can run forever" types of runs. I did reel myself in though and kept it at 6 miles with 6 pickups at the end.


Grilling Goof
Even if it was a little cooler, it was just gorgeous, not a cloud in the sky. Grilling was a must. I got the veggies prepped (zucchini, squash, sweet potato, red & green bell peppers) and marinated some tempeh in balsamic vinegar. I was going for a Grilled Tempeh & Veggie Salad. So happy about the thought of it in fact.

Apparently the awesome running vibes did not carry over to awesome dinner. I burnt the tempeh. No salvaging...burnt to a freaking crisp. I was so pissed off. I didn't have another package and didn't have any tofu either pressed or thawed. I ended up using some Quorn patties instead. Not the direction planned, but it worked. I probably over-reacted a tad, but I was getting really hungry (aka cranky) and then just ticked at myself for messing it up and wasting a package of the tempeh. It isn't exactly cheap. 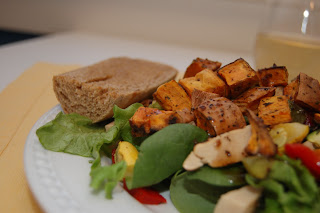 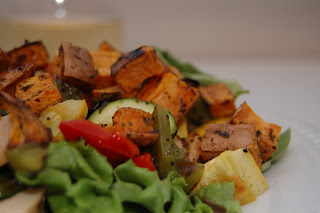 I also grilled up some homemade wheat French bread to go on the side. It was the last mini-loaf. I have a lot of things I need to make and re-stock this weekend.