By Heather Iacobacci-Miller March 07, 2011
Race Night Ouchies
My calves were hating me yesterday after the race. My low back was getting tight, and I knew that was linked to my piriformis and sciatic nerve. Gradually, it just kept getting worse and my sciatica was hurting terribly.

Standing actually felt better than sitting, but just standing in your living room gets a little ridiculous after a bit. Standing to make dinner was actually good for me, kept me moving. I made my Spicy White Chili - but this time I roasted the bell peppers, onions, poblano peppers, and garlic. It imparted such fantastic flavor and richness.

I went to bed and crashed hard. I slept over 11 solid hours and it felt fantastic. I had taken the day off because I knew I'd want to relax and rest up. I will admit feeling just a hair guilty for not getting lots done on my day off.

Rest Day Monday
At one point I even flirted with the idea of doing at least biceps. Don't worry, I stood up from the couch and remembered why I had taken the day off. Thankfully my piriformis and sciatic area aren't hurting today. My calves are really tight and my hamstrings are slowly getting tighter. Again, I tried to just stand and move around as much as possible.

I gladly made some more homemade seitan and some bread. I also ran an errand (The Limited for me) and a quick trip to Kroger to pick up some red bell peppers for dinner. I had just enough Baked Italian-Style Quinoa leftover to stuff some red bell peppers with. I figured this would be a good way to have a fairly quick and easy dinner and use up leftovers at the same time. 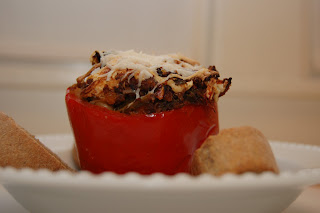 For the peppers, all I did was take the tops off, remove the seeds and ribbing. I filled with the quinoa mixture, placed in baking dish, tented and baked at 400 degrees until the peppers were soft.I topped them with some grated almond cheese and baked until melted and served with some fresh bread I made today.