By Heather Iacobacci-Miller March 23, 2011
Rest Day
Today I had every intention of getting out for a run after work. But as the day wore on, my legs got heavier and heavier from yesterday's workout. Actually, everything felt heavy! It was also about 81 degrees and, once again, super windy. Tomorrow and Friday are supposed to be back in the 60's though. As much as I wanted to get outside and enjoy the sunshine, I decided a rest day was the smarter choice.

I won't lie, it was hard passing up the run today. I really needed some mental cleansing. But I knew that it would likely not be a great run for me. Hot, windy, windy, sore legs. Not good combos. There was still that nagging little part of my brain that was telling me it might actually make me feel better, loosen up those legs, clear that head. Then there is the part that was remembering how freaking hot it felt on Monday when I hit the pavement in 80 degree temps.

Oh, and when I walked out the door to head to my car and was having to lean into the wind and being abraded by flying grit and dirt, I was ok with my decision to forgo a run.

Passing up Grilling
Taking the rest day, however, did give me a chance to make some seitan and plenty of time to bake some spaghetti squash. I've enjoyed making seitan cutlets lately. They'll be great on the grill too. They freeze perfectly, so that makes them really handy for quick dinners as well.

I didn't use the seitan for dinner tonight, however. I was just making it to freeze for later use. Tonight My plan was to go with "Sausage" and Veggies Spaghetti Squash, based off my "Sausage" & Veggies Pasta. Just subbing spaghetti squash for the pasta basically. I thought it would make for a nice light summery meal.

Well, I decided to add in some cannellini beans for an added creaminess, and in the process completely forgot about the squash and zucchini I had meant to include. So, this became "Sausage" and Peppers Spaghetti Squash instead.

In large skillet, brown the "sausage" then set aside.

Saute onions, peppers, and garlic in wine or small amount of olive oil until soft. Add in tomatoes, tomatoes paste, beans, and spices and combine well. Add in squash and "sausage" and allow to simmer and begin to thicken and veggies soften, re-season if needed and add more wine if gets too thick. 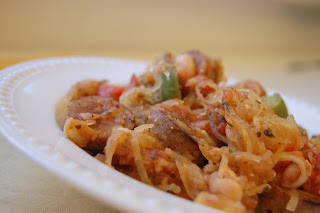 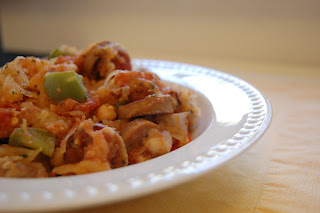 So, not the intended dish, but tasty nonetheless! It's not the prettiest thing in the world, but sometimes the messiest dishes are the best.