By Heather Iacobacci-Miller March 28, 2011
Sunday Soup Night
Last night I ended up making soup for dinner. It was definitely a soup kind of night. We had storms roll through that included hail even. I had some veggies to use up along with some tempeh. So I came up with a Tempeh and Bean Veggie Stew.

Directions:
In large pot, saute onions, peppers, carrots, garlic, and crumbled tempeh. Stir in remaining ingredients and allow to simmer until veggies are cooked through. 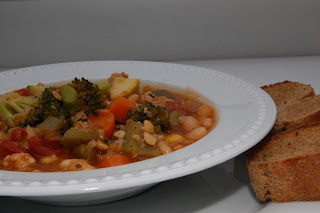 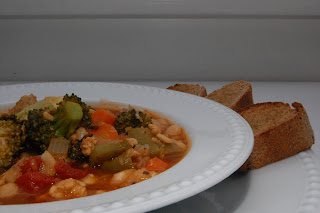 This was a very hearty stew and would also be really good with kale if you prefer that over broccoli.

Running from the Monday Blues
Today we finally got some much-needed sunshine. The temps hovered around 55 degrees, but at least it was sunny. I tried to convince Jason to hit up spin with me after work. That didn't work. So I took myself down to the river trails for an outdoor run.

I was sort of feeling lazy about doing anything. Ok, a lot lazy. But I knew the sunshine and fresh air would help me tremendously. Hello Monday Blues. I set out with the mentality that I'd just run at least 4 miles and see how I felt, even allowing myself to just stop and walk if that's what I felt more like doing.


My 2-mile mark snuck up on my fairly quickly. So rather than circling back, I kept on chugging along taking my normal 6.2 mile route. I must say that I am loving that lately, even if it's super windy, I am typically getting a tailwind on my return half. So much better than running headlong into wind gusts when you're getting tired.

The run was definitely what I needed today. Just being outside and enjoying the fresh air was refreshing. It also made me smile finally seeing so much color with everything starting to bloom. The rain helped wash away the film of pollen, so everything looked fresh and crisp. I wish I had brought my camera with me.

White Chili Night
At lunch we hit up the grocery store finally and picked up some poblano peppers. Jason had mentioned wanting a white chili yesterday, but we didn't have the ingredients. So, I figured I could make that tonight. It was definitely cool enough once the sun started going down.

When I got home from my run, I immediately started roasted up some poblano peppers, green bell peppers, white onions, and garlic for dinner. I let that go while I stretched and rolled out my legs. The recipe is based on my Spicy White Chili, but I've started roasting the veggies for a Roasted White Chili. The roasting adds such a different depth of flavor.

Directions:
Preheat oven to 400 degrees. Place the peppers skin side down on prepared baking sheet along with the onions and garlic bulb. Bake approximately 20 minutes.

Remove from oven and put peppers in a container with lid and allow to cool. This will make it easier to remove the skins. Once cooled, peel off the skins. Dice peppers and onions into smaller pieces and peel and mince the garlic

In large sauce pot, add in all ingredients and allow to simmer until begins to thicken, approximately 30 minutes. If you want to make the chili thicker, add in the slurry mix. 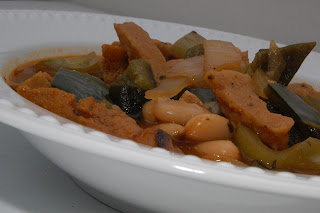 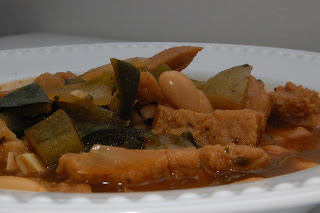