By Heather Iacobacci-Miller March 15, 2011
Gym Day
Today's weight workout marks Day 1 of Week 2 of the total body rotation. This week is the same as last week, only you superset the exercises with the goal of increasing weights by 1.25-2%. The sets are done as 3x5. I started off with 10 minutes on the treadmill then hit the weights.

I also did some ab work before finishing off with 10 minutes on the elliptical. I was going to do 15 minutes, but the man next to me smelled so bad, I really couldn't stomach another minute. Another reason why fans (ceiling at the very least) are ideal at the gym.

Other than the unpleasant smell and lack of air movement, the workout was pretty good. I was able to go heavier for some exercises, but not for others. I guess I need to start taking my weighted gloves to the gym with me so I can micro load. My gym bag is already so heavy though. Even though I wasn't able to increase weights for all exercises, that's ok. I'm happy with the workout and that's what matters right?

What are your thoughts on micro loading rather than trying to increase by larger increments (e.g., from 20 to 25 pounds)?


Taco Tuesday
Tonight fajitas were on the menu. Though, the sun had finally come out and it was light later so grilling actually seemed more appealing had I had more things to grill. 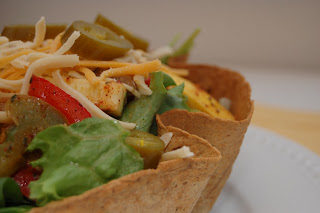 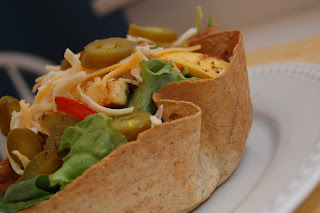