By Heather Iacobacci-Miller April 11, 2011
Sunday Dinner Recap
Just a quick dinner recap ('cause it was tasty). Last night we ended up making a vegan Seitan "Mozzarella" dish using Shirataki Noodles and almond "cheese". I had some homemade seitan cutlets that I heated up. I sauteed onions, bell peppers, and spinach then added in the noodles and homemade spaghetti sauce. 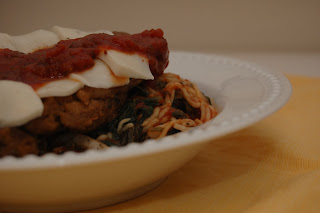 It really turned out to be a pretty tasty dish. Even better, it was super quick to throw together as I didn't have to boil any pasta. I think Jason was afraid of the noodles initially. They don't have the most pleasant odor. When I asked him to rinse them really well, he took that to heart. I finally had to urge him to stop rinsing ;-)

Upper Body Day
Today started off with major thunderstorms rolling through. Thank goodness for rain boots. Dark, stormy Monday mornings are not ideal though I must say. It's even worse when you have a dog terrified of storms. Poor Heath was just shaking, drooling, wouldn't eat his breakfast. Made it really hard for me to get myself ready too.

Anyway, I packed my bag up for a gym day. Today was upper body weights. I decided to add one rep this week. After 10 minutes on the elliptical, I did the following supersets as 3x6. By the way, I had wanted to start with back so I would have more strength for the chinups, but someone was hogging my assisted machine ;-)

I did some ab exercises then another 10 on the elliptical. DOMS have totally set in from my leg workout yesterday, so the elliptical was really not enjoyable ;-) It did seem to help loosen the legs up a bit though (ask me how that went tomorrow).

More Wraps
Jason and I managed a quick grocery store trip during lunch, after the storms has passed. I pretty much refused to hit the store after work after last week's Monday evening experience. Not worth it. I learned my lesson. We've got a pretty good system down at the store so we can get in and out like lightening.


Of course, what I realized is that I had some fresh green beans from last week that needed to be used up rather than anything we bought today. Hate it when I do that. I get so excited about buying fresh veggies sometimes, and then I forget to plan out a day to use them. I decided to go with a Two-Bean Salad and Dijon Seitan Wraps.

Directions:
In large bowl, combine all ingredients and refrigerate for at least one hour.


Directions:
In medium bowl, whisk together ingredients up to the seitan. Mix in the seitan and refrigerate at least one hour. To serve, place spinach, bell peppers, and seitan in a wrap. 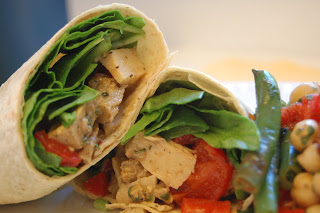 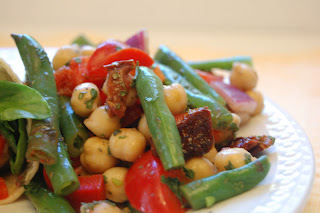 I probably was a bit heavy-handed on the Dijon for the seitan. I probably could have added either honey or agave to offset it a bit. The bean salad was ok, I felt like it was missing something though. Maybe it just needed to sit in the fridge a bit longer. But this was a nice, light dinner. It would be perfect for a summer dinner on the patio.