Running in the Wind & Another Wrap

By Heather Iacobacci-Miller April 07, 2011
Run With the Wind
Wind be damned, I was going to go for a run today. It was another windy day, but not the gusting 25+ mph winds like yesterday. It was significantly warmer and more humid, so those winds actually felt pretty good at times. I thought I hit 6 miles (changed my regular route just a tad), but when I mapped it out, it was 5.8 miles. Darn those last 2 tenths ;-)

Overall, it was a good run. I really really needed to get my head cleared so this helped. I did end up having really bad calf pain though. They're going to be so freaking sore tomorrow (or they already are really). I may need to start icing them after runs.

I think I may be getting too far on the front when I'm landing again. This is a residual habit from dancing days when we had to run with pointed toes, landing on the balls of the feet and never really putting heels down. The heels of my running shoes look as though they've never touched the ground by the way. I really have to pay close attention to my foot strike and try to remember to let the heels come down more.

It seem like if it's not one thing it's the other though. Today no IT band issues, no piriformis issues, but major calf issues. Why do I run again? LOL

Another Wrap Night
I was really not in the mood to cook tonight. Today was a little bit stressful for reasons I won't go into. Let's just say that I would have loved to have had a punching bag when I got home.

Anyway, I was really close to cereal, but that just sounded way too sweet for my mood. So I started digging around in the fridge and pantry. I had some blackened seasoning blend that I had previously made and stored. I also had some homemade seitan and 1/2 a package of silken tofu leftover from last night's dinner. So I decided to do another version of my Blackened Seitan Salad.

All I did was puree the tofu with about 2 tbsp of the seasoning blend and a splash of apple cider vingar then mix it in with the seitan. I also had some slaw that I added to this to complete a wrap. On the side, I served the last of the Sweet & Spicy Strawberry Spinach Barley. 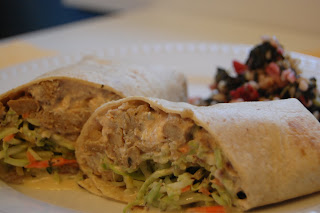 Since I had everything on hand, it was super simple to put together - otherwise it really would have been cereal. I really love the Blackened Seitan. I originally had it at Whole Foods and knew I could make my own version for a ton cheaper (and probably a bit healthier too).