By Heather Iacobacci-Miller April 20, 2011
Storms & Spin
Last night was another long one. We had three storm cells move through, bringing in hail, high winds, and more tornadoes. We ended up giving Heath a prescription drug that was supposed to knock him out. But his fear of storms is so bad, that even that didn't help. He still woke up during the last round (somewhere around 2 am) freaking out.

So it didn't work, and then the poor little guy was so groggy when we got up, I had to carry him down the stairs. We've given him that medicine only a couple of times before, halving it. We thought the odd grogginess and continued anxiety was because of it only being half the dose. Nope, not the case. I don't think we'll mess with that again. It's not worth it, and I can't stand seeing him so out of it.

I had thought about getting in a run today after work. I was kind of itching to run. But we had more rain and thunderstorms in the forecast, so I ended up decided to go to spin and not chance a rainy (or stormy) run.

While it was a great spin class, I do still sort of regret not having gone for a run. Though, I know getting caught in a thunderstorm isn't exactly ideal and that's what would have happened. And we have more rain tomorrow, so I may not get in a run until Friday or Saturday this week. :-( 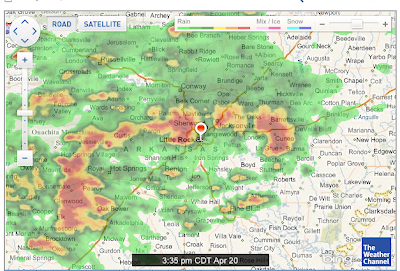 
More Spaghetti Squash
I had spaghetti squash leftover from last night's dinner. I actually made this last night so it was already done and on and for a quick side tonight. Gotta love pre-planning. I paired this with some roasted broccoli and homemade Seitan Cutlets.

Since I keep mentioning homemade seitan, I thought now might be a good time to post my updated recipe. It's based off of this "Beef" Seitan recipe, but I have tweaked it a bit for better consistency.

Directions:
In medium bowl, whisk together balsamic vinegar, oil, and seasonings. Stir in the spaghetti squash and tomatoes. Allow to marinate at least 2 hours or over night.

Directions:
In medium mixing bowl, add in the flours and seasonings and mix. Dissolve one bouillon cube in the hot water then slowly add to the flour. Combine quickly then roll out onto a prepared surface. Kneed the dough for a few minutes. If it is too wet, you can add additional flour. Let sit for about 10 minutes, then kneed a few more times.

In a large pot, bring to boil water, 2 bouillon cubes, and liquid smoke.

You can cut the seitan into strips or form "cutlets." The seitan will expand while cooking, so cut thinner strips than you think you want and make slightly smaller cutlets as well. As a tip, I try to stretch the cutlets into shape just before dropping them in the boiling liquid.

Place your seitan strips and/or cutlets into the cooking liquid. Allow to cook at medium heat for 45-55 minutes. Watch closely and stir often. If the liquid cooks out too quickly, add in a small amount. Any additional liquid can be saved for a gravy/sauce.

* For the seasonings, the key is to really season the flour. Be heavy handed with spices other than salt.

Back to dinner...For the cutlets tonight, I simply coated them in some panko that I seasoned with a lemon pepper blend, parsley, basil, oregano, and nutritional yeast. I baked them at 400 degrees for about 40 minutes, flipping halfway through. 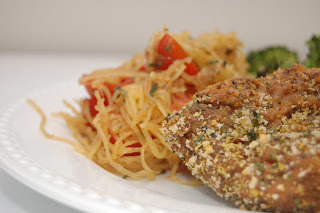 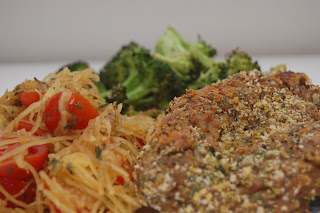 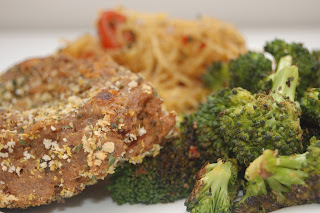 I think this dinner turned out really well. I love roasted broccoli for starters. I thought that the spaghetti squash turned out really nicely. It's great, light side dish. You could easily make it a complete meal by adding in a protein like cannellini beans or even baked tofu. If you like cheese, I think feta would work really well with this.