Seattle Bound: Getting Off the Ground & Day 1

By Heather Iacobacci-Miller April 30, 2011
Delayed Ghetto Plane & Long Flight
So after the gym on Thursday, I was feeling much calmer about the flight to Seattle. I took half an Ativan to start. We got to the airport on time (one hour early like they say). Then we find that the flight is more than an hour delayed. We should have had an hour and a half layover in Houston. Instead, we had 15 minutes to get from one concourse to the other, which in included a train ride. Thank goodness I'm in shape and don't mind running full speed with two carry-ons!

While the Ativan had me fairly calm, the waiting on the first flight started nagging at my nerves. And then the plane arrived...the tiny thing it was. We had to walk out on the tarmac to board. And then the ghetto-ness of the interior just about undid what the Ativan had so successfully done for me. So I took a whole one at that point.
During take-off, Jason looked at me and said, "At least you're not as white as a ghost though." Thank sweetie ;-)

The first flight was just over an hour, the second flight, a terribly long 4+ hour flight. It was a much larger plane, that was filled to capacity. The only children were aptly seated in front of us. The mom used her chair as a rocker. Made watching my tv so much fun.

I ended up starting to get terribly air sick after about 2 hours into the flight. Most of the flights we take are on the shorter side. This was the longest one for me ever. I do get car sick easily, and often get a hint of air sickness. But after more than two hours, no air flow (couldn't get the stupid air things to work for once), and a lady rocking her chair/my tv, I seriously thought I might have to use the vomit bag(s).

I did manage to doze a a little bit (thank you again Ativan). Since we missed our opportunity for food in Houston, we took advantage of snacks I brought, but that almost made me feel worse so we ended up getting a couple of the snack boxes with crackers. The crackers seemed to help my tummy. Oh, got some wine to calm my nerves too ;-)

Feet on the Ground
We landed in Seattle a bit late, really bedraggled looking, but safe and sound. We had thought we were having veggie lasagna, but Terron and Denise had a hectic day of their own. So, we went out instead.  They took us to Elliot Bay Brewhouse and Pub. At first it was the last thing I wanted to do, but it ended up perking me up and it was a great way to end a long day of travel.


Friday Morning
We pretty much fell asleep the minute we hit our pillows. I thought we might sleep all day today, but we didn't. Too much excitement of course. Plus, you don't want to miss this sort of morning view.

We didn't just rush into Friday. And it was really nice to just take things as they came. Denise had to work, so Terron carted us around. We made a stop at Trader Joe's - my first trip into one ever. I picked up a few bars for snacks, some tofu, and some mango butter.

We ended up having lunch on the water at Salty's on Alki. The views were gorgeous. You could see across into downtown Seattle. I had a salad that I topped with my tofu. Jason had some shrimp salad and Terron had smoked salmon. They started us off with some incredible seeded bread. It was hard to not eat all of it and skip the meal. 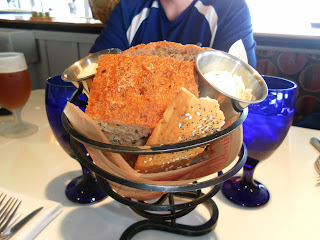 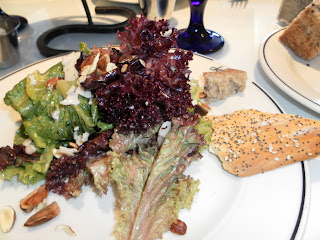 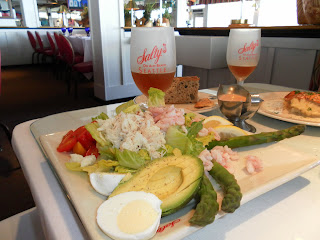 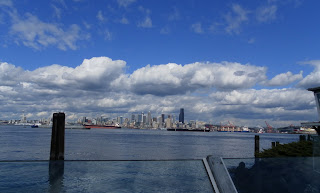 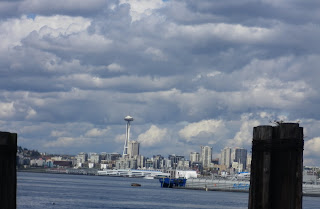 After Salty's we hit Pike Place Market to pick up a few things for dinner. 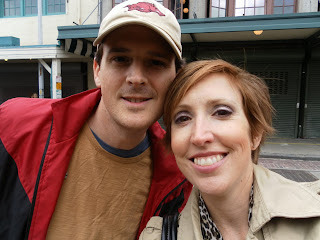 The plan was to grill out. Denise had a homemade veggie burger for me. The guys had a surf and turf and Denise had some fish. (sorry, no pictures of dinner). All in all, it was a really great day.