By Heather Iacobacci-Miller April 25, 2011
Socca Sunday
I finally got around to making socca last night. We didn't make it to the grocery store, and really need to be using up stuff since we'll be heading out of town mid-week. I had made chickpea flour then proceeded to let it go bad, then bought some. So, I finally decided that it was time to try my hand at socca.


Directions:
Preheat oven to 425 degrees and put in pizza stone (if using one).


For the Socca: Whisk ingredients well making sure there are no lumps. Pour batter into non-stick skillet and cook approximately 3 - 3.5 minutes. Set aside and allow the batter to set for at least 20 minutes.

For the topping: In a large, non-stick skillet, saute all ingredients (minus Daiya) until the soy chorizo is browned and veggies soft.

To Assemble Pizzas: If using pizza stone, pull out and add just a sprinkling of corn flour to prevent sticking. Place the socca top side down on the stone. Add toppings and bake approximately 20 minutes. 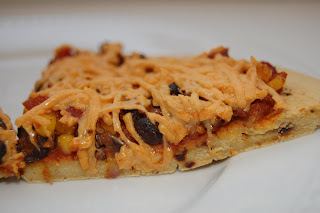 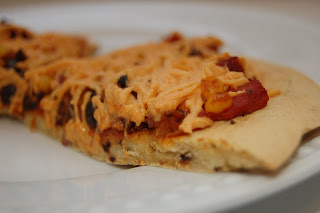 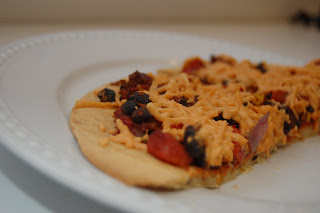 I think the next time I will make the crusts slightly thinner or maybe cook them on the stones just a bit before adding the toppings just for a slightly crispier crust. The edges were nice and crisp though. And we were both really happy with how these turned out and tasted. We will be making socca frequently I do believe!

Plan B Workout: Upper Weights & Kickboxing
I was planning on the gym today. But when I got there, I realized I didn't have my HR Monitor. Yes, crazy me...could NOT workout without it. I decided that maybe that was a true sign that I needed a rest day. I was debating that on and off because I just felt worn out from lack of sleep and major DOMS in my legs from yesterday's workout.

Anyway, I got home and decided to get it done. So I changed it up a bit, but it was still based on the recent workouts I've been doing using 2 exercises for the upper body muscle groups done as supersets of 3x6.

I also did a workout I haven't done in a while, Cathe's MMA Boxing. I used that as my ab workout for the day.

Sandwiches for Stormy Monday
This seems to become the norm lately, but we had more severe thunderstorms start rolling through around 1:30 am. This means another sleepless night for us and the poor Heath Man. My rose bushes are all sagging to the ground, and I'm worried about one that looks like it may be starting to uproot and fall completely over.

We have severe weather in our forecast through Wednesday unfortunately. So no drying out. I just can't take one more hail storm at this point. Jason and I had our vehicles for 10 years with zero hail damage. I get a newer car and within two months, we now both have hail damage.

Right now there are tornado warnings in our home town and the storms are heading our direction. It's 6:25 and almost pitch black out. Because there's a chance we'll be losing power or having to take shelter, I am posting now before dinner so no pictures of the meal. But here's what we're having...

...Since we're going to be heading out of town for several days, we need to clear out the fridge. This can make dinners and meal planning a bit more tricky though. Gotta be rather strategic about it all and include the fact that we make our own lunches. We had two sweet potatoes and a package of tofu. I decided to go with tofu sandwiches for an easy dinner.

I just used a block of tofu that had been frozen and thawed. I added some marinade (Mango Ginger Habanero) and baked until firms and slightly crisp. I topped our sandwiches with the last bit of almond cheese (that needed to be used up of course), spinach, and roasted red bell peppers.