Sweat-tastic Spin & Dinner Made For Me

By Heather Iacobacci-Miller April 13, 2011
Sweat-tastic Spin
This morning I packed my gym bag for both a run or for a spin class. I had thought seriously about getting in another run after work. But honestly, my legs were kind of tired and the temps were climbing. I ended up going with spin - like that's easier on the legs somehow. I guess I'm just a serious glutton for punishment.

Holy freaking sweaty mess. Yikes. I don't know if it was just the Group Ride track being used today or the fact that it was already warm in the gym (or both), but I think I sweated less running in the humid 85-degree weather on Saturday than at spin today. There was track when I seriously wanted to curse (and rejoice) out loud when the interval was over.

I will say that the one HUGE issue I have with my gym is the lack of fans. I hear people complain about it, but for whatever reason, no fans ever seem to make an appearance. The way it's set up, the vents are all in the perimeters in the ceilings - the perimeters are mostly windows by the way. Not very helpful. I have always thought that ceiling fans would be helpful to at least circulate the air.

Does your gym provide fans? Do you like them or not? It seems people either have to have fans or air movement or absolutely hate it. I NEED it.

Worn Out
I had some errands to run after work today. While I don't enjoy driving in the traffic, at least it was sunny and gorgeous out. But I will say it wasn't one of my smarter moves. I had a long day at work (long week so far actually) and was just worn out feeling. Then Whole Foods was packed - actually it was the parking lot that was the worst part.

I was really and truly not going to make anything for dinner. I know, I know, you don't believe me. But it's true. I was either going to indulge in cereal or have a sandwich of some sort. However, I came home to Jason in the kitchen.

He's been working late for the past few weeks, so I have been having to make dinner unless I wanted to eat really late. So...it was definitely a treat to not have to be thinking about what to make or actually making it.

I will say that he has two methods of cooking - he either takes the elaborate hard road or supremely easy road. Today it was the elaborate with stuffed zucchini, a roasted red bell pepper coulis, and salad. 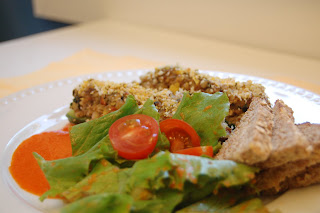 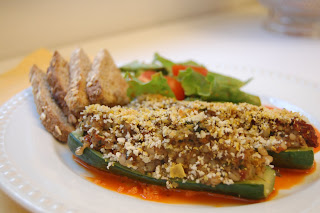 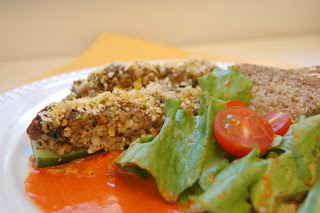 I don't know the recipe just yet, but I know there was barley and sundried tomatoes in the zucchini. I'll try to get the recipe (if he remember what he did) tomorrow. Now I'm going to sit on the couch and try to relax. Happy Hump Day!