By Heather Iacobacci-Miller April 05, 2011
Unplanned Rest Day
Today ended up being an unplanned rest day for two reasons: 1) my legs are seriously heavy after Sunday's leg day and 2) I was quite frankly feeling lazy, plain and simple. Part of me feels a bit guilty, I won't lie. It was an absolutely gorgeous day out. Finally sunshine, temps in the mid-60's. I had my bag packed with my running gear. I was ready to go. Only, I wasn't. I flat out didn't want to do anything.

Instead of working out, I ran a few errands so that I don't have to worry about them later in the week. I also made some more homemade seitan to freeze. So despite no workout, I felt fairly productive.

I even got outside and took a few pictures of the plants that I potted on Sunday. 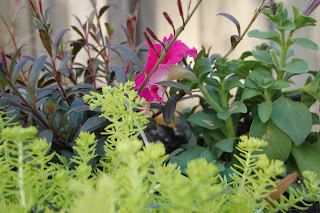 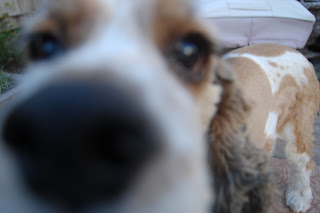 
Sweet & Spicy
During lunch, still thinking I might find the desire to go for a run, I started dinner. I had strawberries and jalapenos that I wanted to use for a salsa, so that was the base inspiration. Then I thought I wanted to pair that with wheatberries (been wanting some lately). Alas, I was out of wheatberries, but I did have pearled barley. So my Sweet and Spicy Strawberry Spinach Barley was born.

Directions:
In pot, bring water to boil and add in barley. Cover and simmer for about 20 minutes until water is absorbed.

In medium bowl, mix together balsamic vinegar, onions, jalapeno, agave, salt, pepper, parsley until incorporated then stir in strawberries. Once barley is done, add that along with spinach to the bowl and mix well. Re-season if needed. Allow to sit in fridge for at least one hour.

I made an easy strawberry BBQ sauce by mixing sugar-free strawberry preserves in with some BBQ sauce. I just microwaved the preserves for 10 seconds to loosen it up then added in the BBQ sauce. I used that to baste homemade seitan cutlets, that I baked off in the oven along with some broccoli and carrots. 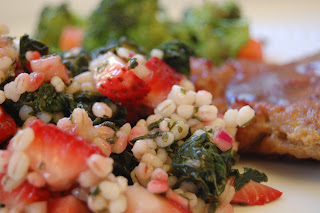 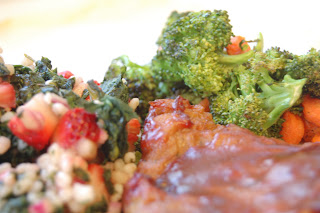 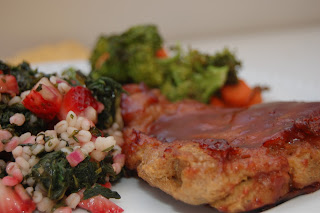 This really turned out nice. It is a great side, but if you added in some chickpeas or perhaps tofu, it'd be a great main dish as well.