By Heather Iacobacci-Miller April 04, 2011
Sunday Dinner Recap
Last night we decided to grill out for dinner - or partially grill out I should say. We grilled portobellos mushrooms, zucchini, squash, red and green bell peppers, and red onions on the grill. Then we took the veggies and turned them into a quesadilla using hummus and Daiya.

We sometimes do grill the quesadillas, but I just decided to finish them off inside. Sometimes it can get messy to put them together outside as we don't have a proper counter. I really need an outdoor kitchen! 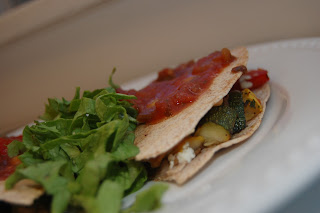 Upper Body
Today was a super stormy kind of day. The temps were in the low 70's and the humidity made the air soupy, plus it was pouring buckets. It's really sort of eerie to be standing at the gym watching the windows shake (gym is on the 29th floor).

I went with another heavy upper body workout today. I did 10 minutes on the elliptical to start then did supersets of 3x5:

I finished with another 15 minutes on the elliptical. It was a pretty good workout overall. The elliptical time actually helped to loosen up my legs. Once again, my booty is super sore when I thought it'd be the quads (especially after the walking lunges).

Monday...
Since we put off groceries yesterday, I ended up having to hit the store after work. Thankfully the storms had moved out, but in place of the storms was a 20 degree temperature drop and insane winds. Hello bad hair day! But, I'll take that over having to try to load the groceries into the car then unload in the rain.

I will say that 4:45 grocery shopping is about as bad as 5pm rush hour traffic. I guess it's about the same thing. Everyone is getting off work and hitting up the store. I got lucky with a fast checkout, but it was just everything (and everyone) in between.

I had no idea what I was going to do for dinner until I got home and started unloading the groceries. I had picked up a spaghetti squash and some cherry tomatoes. I had some kale that was on it's last leg so I came up with a Spaghetti Squash with a Garlicky Tomato, Kale and Chickpeas.

At the same time, toss cherry tomatoes, garlic, chickpeas, salt, pepper, parsley, and basil with small drizzel of olive oil and place in baking dish. Let cook approximately 35 minutes, but be careful not to overcook the tomatoes.

In a large skillet, saute onion in wine or vegetable stock until soft. Season with spices listed and add in chopped kale. Add additional liquid if needed and cover to let steam until kale is soft.

Add the spaghetti squash shreds, tomatoes, nutritional yeast flakes, and capers to the sauteed kale and mix. Re-season if needed. 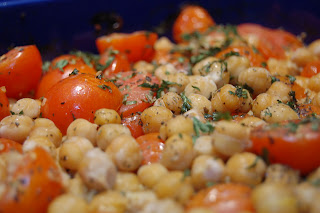 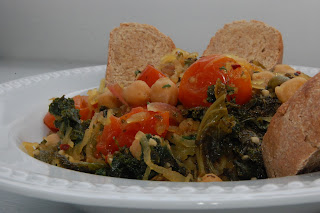 I served with some toasted, homemade whole-grain French bread. I love to scoop up the tomatoes and kale onto the bread. It was a nice, light dinner that packed a lot of nutritional punch.