By Heather Iacobacci-Miller April 19, 2011
Tired Tuesday
So, the plan was that Jason and I were going to get up around 5:30 this morning and hit the gym. I had everything ready to go. I had even let my boss know I'd be doing 8-5 instead of 7-4.

Here's where we went wrong...we both took a Zyrtec for allergies. Of course, we needed it. But it always messes with my sleep in a big way. I was up every two hours throughout the night. At 4:50 am, I made the executive decision to switch the alarm back to normal time and get in some more sleep.

My workout ended up being done after work in the end. I would have loved to have run today, but it was gusting 30+ mph winds today. We have another major storm front moving through, possible tornadoes already predicted.

Since I am not always a glutton for total punishment, I went with upper body weights today over a run. I did two exercises per muscle group as supersets of 3x6. I did 10 minutes on the treadmill as a warm up.

Decline pushups as warm up - 24

I did some ab work as well then 10 minutes on the elliptical. I must say, as unenthusiastic as I was about working out (because I really was), it was a really good, really strong workout for me today.

Green on Green Dinner
Jason is having to work later again this week. I decided to do myself a huge favor to take the pressure off of myself regarding getting dinner done. I actually wrote out what I was going to make each night of the week. Done. No guessing, no fretting, no over-analyzing, no new recipes either (well sort of). I thought about the ingredients on hand - if I don't have it, then I won't attempt to make it and run any extra errand. Total light bulb moment huh? ;-)

I decided to make a version of my Spinach & Asparagus Pasta with Creamy Lemon Sauce tonight. I had kale that needed to be used, so I used that in place of the spinach. I also had some spaghetti squash that I wanted to use, knowing I could use half tonight and half for tomorrow night. So, I came up with a Kale and Asparagus Spaghetti Squash with Creamy Lemon Sauce.

Meanwhile, in a food processor puree the remaining ingredients, adding in the "milk" to desired consistency.

Add the spaghetti squash and tofu mixture to the onions, kale, and asparagus. Re-season if needed and allow to cook until tofu heats through. Add additional "milk" if needed. 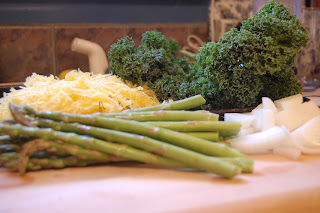 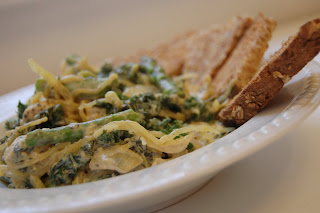 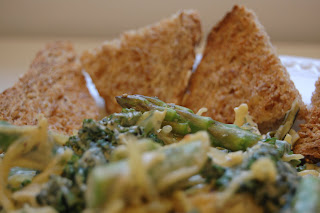 I served with some toasted Ezekial bread. It honestly turned out even better than I had expected. I mean, I had a general idea as the sauce is the same I've used over pasta. But it worked so well with the spaghetti squash, and I loved the texture the kale added to this dish. I think some toasted pine nuts would have been a nice garnish.