By Heather Iacobacci-Miller May 26, 2011
Another Two-a-Day
While I didn't run this morning, I did wake up plenty early enough to get in weights. I guess it was so stuck in my head that I had been planning on running, I just woke up at that time. Anyway, I did lay there in bed and debate weights for about 15 minutes. I just never feel really strong in the morning. Of course, I do just get up, get dressed, and start the workout. Not really any easing into my mornings, ever.

I did abs from Cathe's Power Hour. It's such an oldie workout, but I absolutely love the abs from that one. I always have.

The temps were supposed (key word) to be close to 80 today. But, it was mostly cloudy up until later in the day, so that kept the temps hovering around 70 degrees. The humidity was almost nil, but it was pretty windy out. Anyway, all of that meant I needed to get in my run earlier rather than later.

When I set out, it was about 69 degrees and I actually felt chilly (well, for all of 5 minutes of course). The wind was at my back for the first half of the run. It felt great actually. It might have been 14-16 mph, but it was just enough (on my back) to keep me from feeling hot.

The return....head wind city. But, I was having one of those amazing runner's high runs that it didn't even matter. In fact, even with the head winds, I managed a negative split. Ok, so it was only about 17 seconds faster on the return, but still ;-)

So, two awesome runs this week. I guess I'm back in the game. I think the other crummy runs were likely due to just flat out being sick and overdoing it. And when you've had crappy runs, the good runs right after feel incredible. Today was one of those, run all day long, kinds of runs. Unfortunately, I had to reel it in and get back to work. It was SO hard to do though. Do you ever have to force yourself to stop running? I smiled all the way back to work though.

Oh and the temps, never did budge so I could have run after work and run longer. Of course, had I waited, then the temps would have actually gone up. That's how it goes right?

Vacation Prep
When I got home, I started to tackle my vacation prep list. I think I'm about 90% packed actually. Just need to pack those last things that I can't pack up yet like hair gels, hairdryer, makeup and such. I'm trying so hard to not over-pack, which I usually do. I think I'm good right now, but part of me keeps second guessing what I've got in the suitcase. Of course, Jason reminds me that I can always buy it down there if I forget it. Just as long as I have my contacts, I'm good.

I also painted my nails today (finally). I didn't want to drag extra polish and remover down with me on vacation, so I wanted to get that done tonight. Toes are nice and shiny now. Of course, the sand will quickly abrade the shine, but at least they'll be pretty for a few days.

I baked up some tofu to take on the road with me, but went with leftovers for dinner - Chickpeas & Veggies Sauce with Noodles. 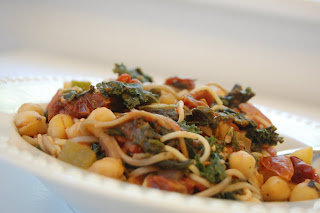 Funny how in trying to clean out the fridge I ended up with more leftovers. And unfortunately, they were some that had gluten so my sister can't polish them off when she comes over to stay and doggy sit.