By Heather Iacobacci-Miller May 03, 2011
Airport & Airplanes Monday
Monday was a long one for us, spent mostly on airplanes or in airports. I was so sad for our Seattle vacation to come to an end. It was raining and chilly when we left. I suppose that made it a tad bit easier to leave that rather than another sunny, spectacular day. The first half of the trip home was just long and boring. The second half was the bumpiest plane ride I've ever been on. When I say butts were out of the seat because of some of the sudden drops, I am not exaggerating.

I have never been more happy to have my feet on the ground. It was rainy and 46 degrees when we landed at home. Even better, the bridge was broken so we had to walk out on the tarmac. Still, I could have kissed the ground. I will say, however, that the pilot and the stewardess were like a comedy act. I've never heard a pilot come on and give the laughable speech he gave, even making fun of the plane's tiny size.

We both crashed pretty hard, but the morning came entirely too quickly. Thankfully it was sunny here today. But I had a sleep-deprived hangover most of the day. And you know how it is when you get back to work after a few days off...inbox overload. I never felt like I got anything completely done.

What was worse is that I kept thinking of all the laundry that needed to be done today, the fact that we had almost no food to speak of, and everything that needed to be put away, dusted, swept, etc. We did manage a fast grocery store trip during our lunch break - one less thing to worry about.

Weights
I decided to hit the gym for weights. It was so pretty out, so it really was a hard call: weights vs. run. But I was really not feeling so hot and wasn't sure a run would pan out very well. The weather here looks like it's finally making a turn for the better though, so I am planning on the run tomorrow. I figured today I could go to the gym and easily leave if I needed to.

I started with 10 minutes on the elliptical as a warm up. I decided to switch up my weights this week. Rather than the full upper workout, I just went with 3 exercises done as supersets for back and biceps.

I also did some ab work, then another 10 minutes on the elliptical.This workout did help me feel a little bit better, but I still felt really "icky" the whole day. I hope it's just fatigue and not getting sick.

Grilling Kind of Day
Because the weather was nice, we decided to grill out tonight. I had some Tofurky Kielbasa that I thought would be good in a sandwich. I split them open to grill along with red and yellow bell peppers and red onions. And of course I had to have sweet potato "fries" on the side. 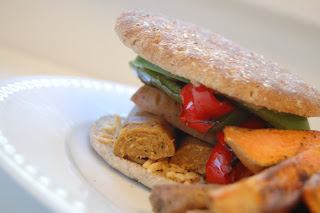 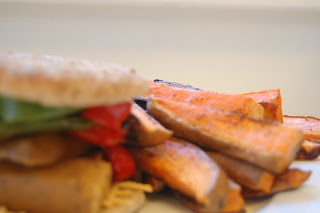 This wasn't exactly the most creative or fresh dinner (as in veggies) kind of meal. But it was easy and tasty.