By Heather Iacobacci-Miller May 11, 2011
Off to the Doctor
Well, I had such high hopes for the Mucinex D. While it's definitely helping my sinus stoppage and drainage, it's not easing up the headache at all. I am definitely maxing out on the ibuprophen right about now.

I ended up breaking down and making a doctor's appointment. Thankfully they were able to get me in today. Though, I spent 45 minutes sitting on the exam table just waiting....and waiting. Then I saw the doc for maybe 10 minutes. Maybe if they started getting paid by the time they spent with a patient then they may actually take the time to "really" see you.

Within minutes he said, and I knew he would, it was a sinus infection and automatically gave me antibiotics, which won't work unless it's bacterial, but he didn't check. Very blase about it. He also gave me a prescription for prednisone (steroid) for inflammation. At least maybe the steroid will help with this massive headache I've had. He seemed to think it should take care of it by tonight. Lucky for me, it started working within the hour.

Do you ever feel like doctors just gloss over you and don't really try to pay attention or get to the heart of the matter? I know that some are more attentive. This one is not, and I really need to find a new primary care doctor to be honest. I've only seen him a few times and never got the impression he was paying much attention.


Spinning? Teaching?
Anyway, thank goodness the prednisone actually worked. I started to feel human again (about 80%). I realized that I had been almost incoherent talking because my head hurt. I was finally thinking clearly. So now I'm really on the upswing! I did meet my friend Cris for spin after work. The plan was just to take it easy again. I seriously hadn't expected the meds to work so quickly - though zero complaints. Kind of made the 45 minute wait worth it....

We got there about 20 minutes early because she needed to learn how to set up and all that jazz. One of the newer employees was sitting on the instructor's bike saying the instructor was running late. Poor kid was clueless. He looked a nervous wreck saying he'd never even taken a spin class. The next thing I knew, the owner of the gym was asking me if I'd take over. HUH??? WHAT??? Um....Ok. I kept promising my friend that there really and truly was a normal spin class, with a real certified instructor.

Thank goodness for the Group Ride track and notes. Got me through up to the last 3 songs before the real instructor got there. I was so happy to hand back his bike. Don't get me wrong, I did actually enjoy teaching. It's something I've wanted to do. But a little preparation would have been nice ;-) Damn good thing I went to the doctor today is all I have to say.

And I should add, that if I had not been feeling better, I honestly would have declined and not taught that class. Spin is no joke.

Burgers to the Rescue
I knew I was going to be getting home later tonight. Jason went on a bike ride and was getting in later too. So I decided to go with the Red Bean and Quinoa Burgers I made the other day along with (what else) baked sweet potato "fries."

In food processor, blend all ingredients up to flax egg. Transfer to large mixing bowl and stir in remaining ingredients, adding additional flour if needed.

Form into patties and place on prepared baking sheet. Bake approximately 20 minutes then flip and bake an additional 20-25 minutes until firm and golden.

*Just a tip, if you heat up the beans, the blend easier. 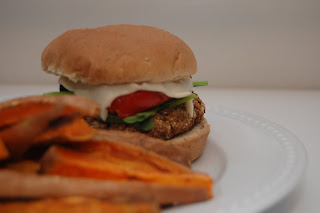 I topped with the usual: red bell peppers and spinach. I used a faux cheese and spicy brown mustard as well.