By Heather Iacobacci-Miller May 09, 2011
Pasta Salad Sunday
Jason loves pasta salads, especially during the warmer months. Since we didn't go to the store yesterday like we should have, I just went with his pasta salad suggestion. I made a Creamy Sundried Tomato & Basil Pasta Salad using silken tofu as the "cream" base.

Directions:
In food processor, puree tofu and ingredients up to the pasta.

After pasta is cooked, run under cold water and transfer to large bowl.

In skillet, saute portobello mushroom and zucchini until soft. You can saute in white wine for additional flavor and to use less oil.

Add portobello and zucchini mixture to pasta along with chickpeas, peas, and the tofu mixture.

Serve right away or allow to chill before serving. 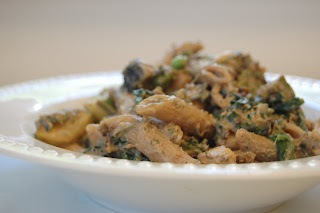 I had planned on adding in some pine nuts, but was out - well, there were a few, but not enough to make a difference.


Cough Cough, Blow Blow
This morning I woke up feeling worse rather than better. Now it's in my chest. So, no sore throat, but super stuffy and now starting to cough. My upper lip looks like I've got lipstick smeared around because of blowing my nose a million times. I think I've killed a small forest using tissues. Not a happy camper.

I did go into the office. I had some projects that I really needed to get squared away today. I ended up making it for about four hours before going home to get back in bed. The crazy thing is that even when I'm sick and want to sleep during the day, I can't. I've never been a napper. So, I only was able to sleep for about an hour or so. Do you nap well (sick or not sick)?

I spent the rest of the day with my butt on the couch watching Food Network and a Bethenny Ever After marathon. This is the most TV I've watched in months combined. I will admit that I feel like a lazy slug now. Yes, I'm sick, but I still feel like I was somehow supposed to be doing something. In fact, I had it in my head that I was still going to be able to meet my friend for Group Ride tonight.

I was the one who talked her into trying the class, and I knew how excited she was to give it a go. I was super excited to have a friend to workout with. So I felt bad that I felt bad. I had emailed her to let her know I wasn't feeling very good, but was taking medicine and trying to get back on track. Sometimes I am so mental. Anyway, around 3pm I finally admitted to myself that it wasn't going to happen.

Since I was feeling like such a bum, I decided to make some Red Bean and Quinoa Burgers to freeze and I started marinating some tofu for a grilled veggie salad sometime this week. I've been needing to make the burgers for several weeks now to replenish my veggie burger stash.

I think I kind of over did it though and ended up laying back down on the couch until Jason got home. I am letting him do the cooking now. He's making some kind of soup (despite the fact that it's in the 80's right now). He's all about comfort food. I'll be sure to get the recipe and post it tomorrow.