By Heather Iacobacci-Miller May 19, 2011
Letters are Fun
So glad you all seemed to enjoy the Letters to Self yesterday. I really enjoyed reading yours as well. It was kind of fun writing those out, may need to do that more often.

Last night was low-key after the migraine. We did meet up with friends for a pre-wedding happy hour. She's getting married on Saturday and there aren't any bachelorette plans. So one of our mutual friends wanted to just gather a few people to have one last happy hour with Gwynne before the big day. I wasn't able to stay long as I wasn't feeling super fantastic. But it was still nice to show up for her at least.

Jason made some quick fajitas for us, and then I was in bed snoozing by 9. I actually only woke up only once during the night. For me, that's the equivalent of sleeping through the night. Guess I needed the rest!

Hot Running
I had really and truly wanted to get up early this morning for a run for two reasons. One, it's supposed to be in the low 80's this afternoon. Not sure I'm up for those temps just yet. And two, Tiffany has been posting gorgeous early morning running pictures.

While I don't enjoy morning workouts, there is something so calming about a morning run with the world just waking up around you. Sleep trumped the run though, and that's ok. I needed it.

In the end, I went out for a hot, windy run after work. I knew it was warm, so I went into the run without a set distance in mind. It was more about going with the flow of how I felt. It was windier that I would have preferred, but when it's warm out, the wind can be a very welcomed thing.

While I was totally prepared for the fact that it was going to be a tougher run because I'm not acclimated to the heat, I was not prepared for how shitastic it really was going to be. This was probably one of the worst runs I can recall. Just BAD. My legs felt heavy from the start. It was hot, sticky, even the wind was hot. The last 1 mile I ended up doing as intervals. I eeked out just a little over 4 total.

I'm trying not to be furious with myself over the run. I knew it wasn't going to be a piece of cake, but man oh man. When you have runs that bad it makes you question why you run period. Frankly, the last few runs have been less than stellar. I mostly just enjoyed the being outside aspect. I know running has it's ups and downs, so I'm going to try to not dwell on this run and just look forward to a future run...a better run.

Directions:
In medium bowl, whisk together wet ingredients and spices. Toss in veggies and mix well. Refrigerate for about 4 hours.

I made some quinoa as well and seasoned with some of the marinade for the slaw. I added in a little extra OJ and some fresh parsley at the end. For the Seitan Cutlets, I dredged them in a small amount of panko seasoned with garlic powder, basil, oregano and then baked it until crisp. 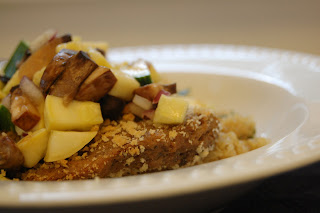 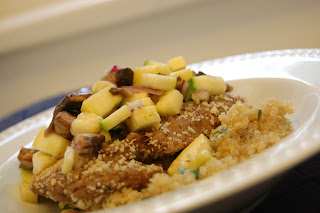 This actually turned out way better than I had expected. If you have oranges, zest would definitely be an ideal addition.