By Heather Iacobacci-Miller May 04, 2011
Running for Normalcy
For whatever reason, I am having a very difficult time getting back to normal (or my version of normal) after the Seattle trip. I've been super covered up at work, so that's been a bit stressful. And overall, I've been feeling rather blah. I hope to recover soon! At least it's sunny out finally.

Apparently it continued to do nothing but rain and storm here while we were away. There was major flooding that even caused the closure of major interstates, highways, and roadways. We need this drying out period in a bad way. And I can enjoy the sunshine of course.

In order to take advantage of the sun, and to attempt to interject normalcy into the day, I went out for a run. It's been almost two weeks since I've done more than 2 miles. Crazy. I took care of that today with a great 6.7 mile run.

It was about 70 degrees with a slight breeze. The only downfall was that the sun was drying all the dampness in the grass, so this meant humidity. Overall, no complaints at all. In fact, had I had some sort of recovery fuel in the car, I would have gone a little longer. But all I had was water.

Over the course of my increased mileage, I have found that I can't really go more than 7 miles without having something post run within about 15 minutes. Anything longer than that and I start to get nauseous. So I was already pushing it today. See, I really do try to listen to my body and exercise smartly ;-)

Dinner Done
I did the best favor to myself last night. While grilling dinner, I threw together dinner for tonight. Oh, and today, I started dinner for tomorrow. Anyway, last night I made a very similar version of the Lemony Quinoa and Roasted Green Veggies dish that I made last week. This time I just used grilled broccoli, frozen peas, and fresh spinach.


Directions:
Either grill or roast the broccoli with the lemon pepper spice blend and sea salt.

In a large bowl, combine quinoa, broccoli, peas, spinach, and chickpeas. Re-season if needed. The heat from the quinoa will wilt the spinach. Serve either room temperature or warm. 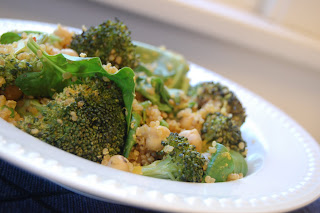 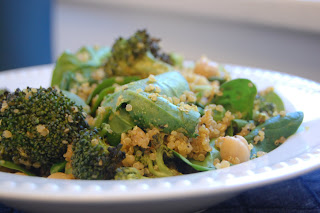 This was perfect for the evening. Even better, it was already made! I think I've finally gotten Jason sold on quinoa. I think the key is to bulk it up with other ingredients.