By Heather Iacobacci-Miller May 14, 2011
Friday
Yesterday, after my sister got to me house, we all (me, Jason, Sarah) met my cousin, his wife, and two kiddos at a place called Pizza Cafe to enjoy their patio. Another couple was supposed to meet us, but they weren't able to make it after all. It was crazy weather yesterday. We went from upper 80's all week to temps dropping to about 72 by the time we all met up, and crazy wind. 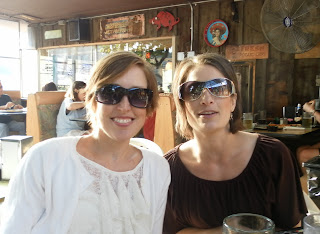 We still had a good time. We hung out for about 2 hours before heading back home for Pizza Friday. Unfortunately, Sarah has been sick too, so she wasn't feeling the best. I'm so happy she still came up for a visit and we still had a nice visit (as always). Oh, and we enjoyed yummy pizza together too.

Saturday
This morning started off rather brisk, especially for mid-May. It was 57 with gusting winds. It was supposed to be sunny and low 70's...um...not so much. Despite 23 mph winds, Jason and I laced up our running shoes and headed out for a 6.2 mile run. I was really looking forward to the run for two reasons: 1) getting to run with Jason and 2) because it's been a week since I've been able to run.

I won't say it was the worst run, not by a long shot, but man the return half was tough with the strong head winds. I think I definitely earned my new running shoes and shorts I scored today ;-) We have a local running store called Go! Running that we really like. Everyone there is beyond friendly, they are super helpful, and are really involved in the community. Today was their 1 year anniversary so they were having a big sale and cookout. Can't pass up a sale on your running shoes, especially when you are in desperate need of new ones.

After getting home and cleaned up, we had a later lunch then hit the grocery store. It's really a rather gray, gloomy looking day out there. We're now chilling in our comfy (warm) clothes on the couch. Even the crazy Maddie has actually been curled up with us rather than flitting around trying to find things to get into. Guess it's one of those comfy couch days.

I do plan on getting laundry done, that will at least make me feel less lazy. But other than that, maybe a movie night in store for us. I hope you all are having a relaxing weekend so far. Surely we've all earned it!