By Heather Iacobacci-Miller May 25, 2011
More Spinning
Today ended up being another spin day for me. It was super windy and muggy out (we have a major storm system heading in the evening), so it worked out nicely that I wasn't planning to run. Though, I was sort of putting off weights today.

It was a good class today, same old track, but good sweatfest nonetheless. Of course, the extreme humidity might have something to do with the excess sweat too ;-)

I was planning on getting up and running with my friend again in the morning. Really looking forward to it even though it meant getting up before sunlight. But, he had to back out (sigh). He ran today and is planning on doing an 8K Saturday morning (woohoo!!), so he needs to rest more than he needs to run.

I am absolutely ok with missing out on the run if it's for a good cause. Unfortunately, we'll be on the road Saturday morning so we can't be there to cheer him on (or run ourselves).

Storms & Stir Fry
It looks like we're in for a really bumpy ride tonight with the weather. It's still sunny out and we're already under watches. The mid-south and south are just getting beaten up this spring. I know there were deaths from tornadoes yesterday in Oklahoma, Kansas, and Arkansas. And we all know about the tragedy in Joplin, MO. It's so hard when places are being hit over and over again.

We've got major flooding already, and the constant heavy rains and storms are not helping at all. In fact, we found out that part of the route we usually take to Florida is close because it's under water. What always makes me nervous when the ground is saturated, is those large old trees coming down. And that's what we have all in our neighborhood. It seems we've all had some crazy weather starting with massive snow storms, flooding, unusually cold temps...How are you fairing in your area?

Since I couldn't cook out, and I'm still trying to use up any fresh foods, I went with stir fry. Actually, Jason suggested it. I balked at it, but then made it anyway. For some reason, it really didn't sound appetizing to me. But, it was fast and used up fresh broccoli and squash. 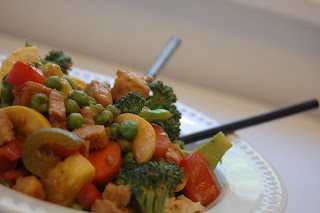 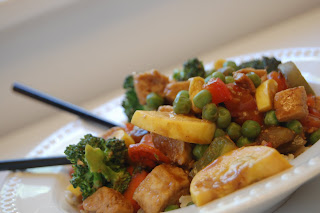 I can't really say this is a recipe at all. It's basically a refrigerator/freezer special. I even used a pre-made sauce that I doctored up just a little bit with some PB2. Oh, and of course some Sriracha chili sauce. Can't forget about that yummy goodness ;-)