By Heather Iacobacci-Miller May 23, 2011
Sunday Night Scramble
Last night we ended up having breakfast for dinner. This is a real rarity as I've never been a big breakfast foods fan (other than say oatmeal). I made up an easy tofu scramble with bell peppers, onions, and spinach. I served up some tempeh bacon and half a bagel with peanut butter. Super simple. 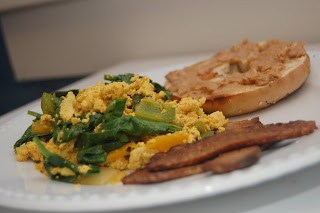 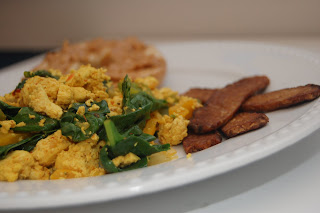 I am going to have to remember this meal more often. It wasn't too heavy and you can change out the veggies in the scramble for endless combinations.


Monday Spin
Today ended up being spin class for me. We had rain chances in the forecast, plus it was going to be too warm and muggy for a run. I was supposed to meet a friend after work for spin, so it was all sort of decided ahead of time: Monday = Spin. Unfortunately, she wasn't able to make it. But I went anyway.

It was a pretty good class despite the fact that I've done this one track at least a million times. My legs were talking to me the whole time though. I think they were more tired from yesterday's run (the intervals most likely) than I had realized. But it was good to get them moving.

This is going to be another one of those weeks when I have to be strategic about my workouts. If I want to run, it'll have to be in the morning or at the gym. We have rain in the forecast almost all week. Also, my rest day really needs to be Saturday as we'll be on the road that day heading to the beach.

I am planning on running in the morning with a friend. This means I must get my butt out of bed and actually do this. At least I know it'll be cooler for the run. Now just need the running gods to smile upon me since my last few outdoor runs weren't on the suckier side.

Grilling Out Sort Of
While it wasn't exactly gorgeous grilling weather, the rain was holding off (or so I thought). Jason had gone to the grocery store and picked up portobellos and some goat cheese. He's not subtle when he wants a certain dish ;-) It's so rare we have real cheese at the house anymore; big treat.

So, I decided to go ahead and grill up the dinner. This wasn't a complicated sandwich. I just wiped the mushrooms with balsamic vinegar. I also brushed some tempeh slices with the balsamic vinegar as well (wanted the protein).

When I went out to top the mushrooms with the goat cheese, that's when I had to go to plan B. The propane tank had just ran out and it started raining at the same time. Guess that worked out quite nicely I suppose. 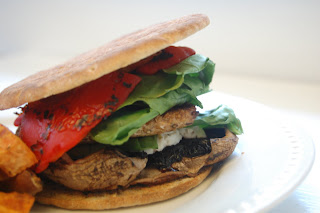 I had to finish up the sweet potatoes I was also grilling inside. I mean, I was making a sandwich so sweet potatoes had to come into play right? Anyway, I layered up the sandwich with tempeh, portobello, roasted red bell peppers, and spinach and used whole-wheat sandwich thins.