By Heather Iacobacci-Miller May 24, 2011
Two-a-Day Tuesday
This morning I did indeed get out of bed and get in an early morning run. It did help that I had a running date with a friend. Jason was going to bike while our friend Thad and I ran.

I finally had a really great outdoor run too. Maybe it was the cooler temps (only about 64 degrees), being completely over the sinus infection, or the good company. Either way, I'll take it.

We got in 5.4 miles. We had to turn around just a hair early because part of the path was flooded. I was ready to run, not swim this morning. I have to give major props to my friend Thad.

I know he's been worried about going out for a run with me, thinking I'll just run off and leave him. But we were there to run together. I let him pretty much set the pace, and he's much faster than he gives himself credit for. So high 5's Thad!!!

Today was another 2-a-day Tuesday. I am trying to fit in all of my weight workouts before we leave for vacation. So I decided to go with biceps, shoulders, and abs at lunch. I knew I could get in and get it done efficiently.

Once again, I went with the giant sets of 3X(6,8,10). I really like the total muscle fatigue you get at the end, despite having to go a little lower with weights.

I did abs from Cathe's High Reps DVD as it's short but tough.

Since I got my rear up and got my workout done early (and at lunch), I got off at normal time today. This left me time to hit up Barnes & Noble. I am on my last unread book in the house and needed to restock for the upcoming beach vacation. You can't sit on the beach all day without a few books and some magazines.

Too Much Dinner
Dinner was supposed to be fairly simple. We have lots of veggies to use up before we leave on Saturday. I was going to do a Pasta & Veggies dish. Surprise, no rotini or penne. I did have a bag of Shirataki Noodles and some soba noodles though. So I combined those for Chickpeas & Veggies Sauce with Noodles.

Cover and let the kale soften for about 5 minutes.

Add in remaining ingredients, toss well and cover to allow kale to continue to cook down, approximately 5 minutes. Uncover and allow to simmer until sauce thickens. 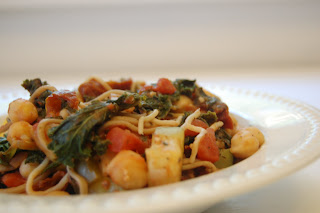 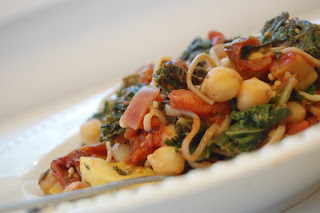 This is basically a one-pot dinner other than a pot to cook the soba noodles in. And of course this was over-kill and made way more than I had intended. So, you could easily use half a squash and 1/2 zucchini, smaller bunch of kale, and just the shirataki noodles or just the soba noodles.

BUT, it was really tasty and that's what matters most - especially when you're just making stuff up ;-) It has sort of a Mediterranean hint, maybe because of the sundried tomatoes. If you like feta or goat cheese, either would work really well here too.