By Heather Iacobacci-Miller May 17, 2011
Two on Tuesday
Today ended up being a two-a-day workout day for me. It's been a really long time since I've done a two-a-day. I used to really enjoy doing a 5-day weight split by doing 30 minutes of weights at lunch then 30 minutes of cardio later in the day (major pick-me-up). But when I started increasing my running distances, this just became too much. It wasn't an hour total, it'd be more like an hour and a half.

Time this week, however, is minimal. I have so much going on and may end up having to use Saturday as another rest day rather than a run day. So, I figured a two-a-day today wouldn't necessarily be a bad thing. I really wanted to get some weights done and to run. It's just way too nice out not to get in a run. But I didn't want to skip out on weights this week either.

I know you're probably thinking that I could just do weights Thursday and Friday, and I likely will. But I am splitting up the muscle groups and will do the other split either Thursday or Friday and hopefully get in another run on the non-weight day. Got all that ;-)

So, at lunch, I did a workout for biceps and shoulders going with giant sets like I did last week - 3x(6,8,10). It was a quick workout, only about 25 minutes even with the abs at the end.

I finished up with abs from Cathe's High Reps DVD, which I haven't done in ages.

After work, I laced up my new running shoes and headed down to the Big Dam Bridge to get in a run. It was on the low 70's with only a light breeze for a change. I was super excited. Unfortunately, the run was a bit more work than fun. It wasn't the worst run, it wasn't the best run. At least it was a gorgeous day out, and I got to soak that up.

I struggled a bit keeping my heart rate down. I had to take more sinus meds today, and I am pretty sure that's where the issue came from. I managed to eek out 6 miles though. And while I thought I was running in place, I managed a respectable time somehow.


Tofu Tuesday
I got home, stretched, rolled, then got cleaned up so we could get dinner going. It was too nice out not to grill. I had started pressing tofu at lunch as an option for dinner. So we ended up doing a Strawberry BBQ glaze (just mixed sugar-free strawberry preserves with BBQ sauce) for the tofu and grilled up some squash to go on the sandwiches. On the side was (what else) sweet potatoes. 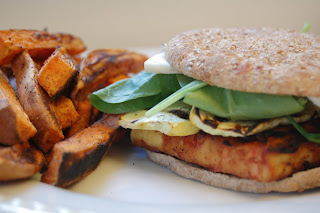 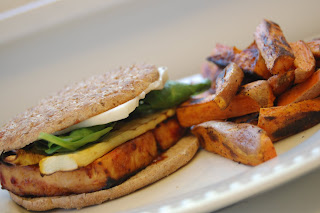 I topped it all off with some almond "cheese" and some spinach because I though it needed some color. This definitely hit the spot for the evening. It definitely made the evening feel like summer.