By Heather Iacobacci-Miller May 29, 2011
First Beach Day
Well, we got into Perdido Key, FL around 2 pm yesterday. Rather than going directly to the condo, unpacking, then heading back out for groceries and such, we stopped at a Walmart Super Center on the way in. It was kind of nice getting that out of the way and only unloading the car once. Though, the car was beyond packed and it took two carts to get it all up to the room

Getting the errands out of the way meant we were able to hit the beach on our first day here. Usually it's around 6-ish by the time we've unpacked and run errands and unpacked again. So this was really a treat.

First Beach Dinner
Dinner was a roasted veggie salad with tofu. We were both looking forward to eating lots of veggies after being in a car most of the day with only a pit stop at Subway. I did have a salad there, but just not the same fresh veggies I like to use. 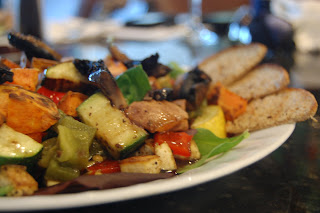 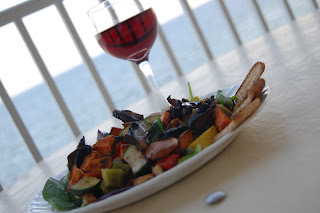 It was so nice eating dinner overlooking the Gulf of Mexico. It was just the right amount of breeze to keep you cool, but not so much you felt like you were being abraded by wind and sand. We pretty much spent the rest of the evening on the balcony. We were pretty worn out from driving (and sitting on the beach for an hour), so bed time was 9 pm. Yep, we're old ;-)

So far, we're off to a pretty decent, pretty lazy start to a week on the beach. I hope you all are having a great weekend wherever you are!