By Heather Iacobacci-Miller June 23, 2011
Two on Thursday
Running
This morning it was a little tougher peeling ourselves out of bed for a morning run. I think as the week progresses and workouts have added up, my body starts to talk to me a little more, protests a little more. But I really wanted to get in a run this morning since there is a chance of rain tomorrow morning.

It was about 10 degrees cooler this morning over Tuesday, but the humidity was still nice and high and almost no breeze. So somehow, by the end, it may as well have been 85 degrees. I couldn't stop sweating - nice visual right ;-)

Jason and I did the first mile together, then he made a stop while I continued on and later caught back up with him. This worked out just fine because while I'd love to run the whole time with him, I wanted to put in more miles and he's trying to build his miles back up. I don't want him to hurt himself going too far too soon (thought he's been doing 4-5 miles not trivial).

Normally when I'm solo I have my music going. When I run with someone else, I don't even bring my iPod. So when we split apart, I've got no conversation and no music. But you know what, that's not such a terrible thing. I think it's really good to practice running sans music. I think you can be more in tune with your body, your surroundings, yourself in general (for better or worse).

So, today I made it right at 6 miles. For the most part, it was a great run, but I did start feeling sluggish by the very end. My hips were feeling super tight. So I really need to work on rolling and stretching them more.

Lifting
At lunch I went ahead and hit the weights at home to do back, chest, and abs. I had really hoped to get to the gym for back so I could do pullups, but it was more convenient to do the workout at home today. I did a giant set for back then superset for chest.

I finished up with abs on the stability ball. Overall, it was a pretty good workout. I did struggle with chest, hence the drop in reps on the 2nd & 3rd sets. Sometimes my left elbow starts to feel like it's going to just flat out give out. Tendon issue perhaps? It's not that it even hurts, just zero strength.

Squash for Summer
I've been really wanting spaghetti squash lately. Maybe because it just feels sort of light and summery. I had originally thought about pairing it with roasted cherry tomatoes and garlic, but Jason and I both decided a cold dish sounded better. So I made something very similar to my Italian Spiced Spaghetti Squash, which was more of a side dish and this is a one-pot-wonder (well, not so much pot, but you get the drift).

Mix together the spices for the tofu coat with spices. Bake on a prepared baking sheet until firm and crisp, flipping once halfway through the cooking (usually takes about 45-50 minutes).

At the same time, place the spaghetti squash flesh side down on a baking sheet and bake until softens and you are able to easily shred the inside into "spaghetti."

In a large bowl, add the tomatoes, garlic, and spinach. When the squash is done, add approximately half of the shreds to the bowl (depending on the size of your squash). This will help wilt the spinach. Add the spices for the spaghetti squash, nutritional yeast, balsamic vinegar and toss well, then add in the tofu.

Either serve right away or set in fridge and allow flavors to meld. 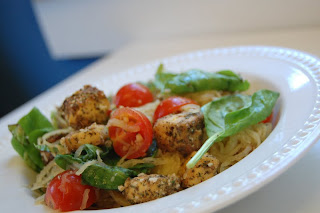 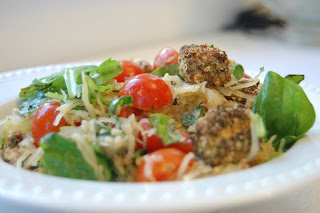 You could easily use white beans or chickpeas in lieu of the tofu. I think you could spice up the chickpeas and toast them for a great texture addition.