By Heather Iacobacci-Miller June 21, 2011
Mopey Monday Apology
I wanted to back up to yesterday's post just a minute. I think I may have come across as super negative. I know Monday's typically stink for most people - no one wants the weekend to end. Also, we all have "those" kinds of days when shit happens (over and over). I hope I conveyed that I tried to turn the day around though.

I probably should have put more emphasis on the fact that while all the crap was happening, I really, truly do try to remember to be thankful. So I sent out an email to the wrong person, in the end it was no big deal. Projects crumble all the time; I still have a job. I am super luck to work for a great company and boss.

I was a klutz, but I didn't break anything, unlike a friend who broke her toe this morning. I was able to go to spin class - I am physically capable and have the financial means that allow me to belong to a gym period.

Some of you lost loved ones yesterday or mourned the loss of a loved one (anniversary of passing). I didn't lose anyone yesterday. I got to email with my mom, dad, and sister. For that I am thankful.

I try to be honest in my blog, and sometimes that means spilling out about crappy days. But, I do need to remember to recognize that it really wasn't so bad in the grand scheme of things.

Running & Lifting (Two on Tuesday)
This morning started off nice and early. Jason said he wanted to get up and run with me so we got up a little after 5 am. I don't know how much of his motivation to run was because he didn't really want me heading out alone or that he's really wanting to get back to running himself. Either way, I'll take it.

We hit the river trail around 5:45 with the sun just barely starting to come up. It was already 82 degrees and extremely humid. It was another gusting wind run, but that can be a welcome thing when you're a hot, sweaty mess. I ended up doing about 5.2 miles then I did 4 x 20 second sprints before calling it quits.

It's funny that some days you see more wildlife than others. Today I saw 3 bunny rabbits, tons of squirrels as always, and a fox. There was a dead field mouse too (poor thing) that reminded me of the Little Bunny Foo Foo song, especially after seeing the bunnies - just a reminder of how the song starts.


Little Bunny Foo Foo,
Hopping through the forest
Scooping up the field mice
And boppin' 'em on the head

Anyway, I did my best to not start singing the song, but Jason said it was already in his head after I mentioned it. Are you singing it now? You are aren't you ;-)

During lunch I did a short weight workout for biceps and triceps with abs from Cathe's Power Hour DVD. I just went with my typical 3x8 supersets:

I gotta say, not my strongest workout. Just felt really weak from the start. I know it happens of course. Not going to beat myself up over it. I got it all done; I didn't drop down in weights; I cranked out every last rep. Just felt harder today.

Celebrating Summer
Summer here is starting off with a front that moved through today bringing slightly cooler temps (as in it's cooler this evening than it was at 5:30 am). No sunshine, pool lounging to celebrate. Of course, I've been celebrating summer for weeks now with pool time, grilling time, lots of patio time and summery meals too.

The other day we made up another batch of Pineapple Salsa, this time adding in a roasted poblano pepper that needed to be used. I also made some veggie burgers up (finally). Well, this salsa just screams summer, so it seemed appropriate to make a more summery burger to celebrate the official kickoff of my favorite season. 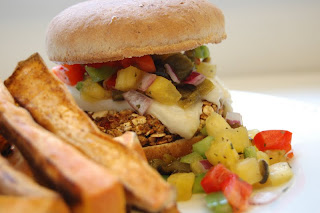 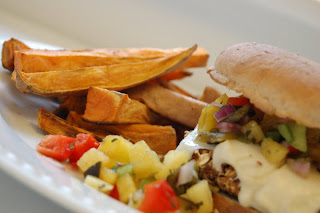 I almost always top our veggie burgers with spinach, roasted red bell peppers and a vegan cheese. It's good so why change it? Well, sometimes change can be good. This may have been a little (lot) messy, but so worth it.

What is your favorite season? I know summer is hot, humid, hot. But it also means lots of pool time, lake time with the family, grilling, general outdoor fun.