By Heather Iacobacci-Miller June 26, 2011
Baking Night
Yesterday was a nice, relaxing day. We enjoyed pizza for dinner since we didn't get to have our normal Pizza Friday. I think I may have a pizza addiction perhaps. Do they have groups for people like me? 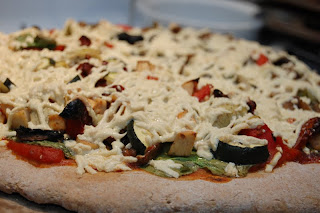 Last night I ended up playing around with the base recipe from the fabulous Kristina (spabettie) for Garbonzo Cookie Balls. I have made a version using cranberries and another using vegan chocolate chips. She recently made a Mint Chocolate chip version that got us into a little chat about other awesome flavor combos.

So, last night I decided to play around a little bit. I think I kind of upset Jason because we were supposed to play pool. Instead I was wanting to bake. We had just finished watching What Happens in Vegas and I was a little antsy. The oven was still fairy warm from the pizza, and I thought I could make the cookies quickly. I know he gets annoyed with me sometimes for just not being able to stop going, doing, thinking.

But, back to the cookies. I had just a small bit of banana left over that I didn't finish from yesterday morning (pre run) so I wanted to try a Banana Nut version as well as an Oatmeal Raisin. 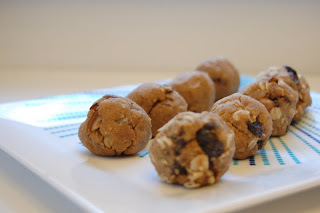 I am not 100% happy with the mixes so I'll wait to post the full recipes, but I'm really close. I think the banana may have needed just a tad more banana flavor (that one was the better of the two). The Oatmeal Raisin definitely needed more spices and a little more stevia. But what's awesome is how fast these are to whip up. They're totally vegan AND gluten free as well.

Gym, Kitchen, Relax
Today I woke up almost too early. I needed to hit up Target and Whole Foods, neither of which are open at 6:15 am. Why couldn't I have gotten up that early on the morning I wanted to run?

Today was also gym day for me. I really needed to get in there and hit legs and shoulders. My friend was planning on meeting up me up there as well before later coming over to the house with her hubby for some pool lounging fun. But, I was needing to go earlier than she was able to, so we at least passed each other as I was leaving and she was arriving.

I started with 15 minutes on the elliptical (in a completely empty gym with the lights off, just enjoying the daylight). I pretty much did 3x8 unless noted.

I did some ab work then stretched for a while before heading out.

I hit up the grocery store then headed home to get a few things done in the kitchen before our friends showed up. Jason was working in the yard and while I should have been weeding, that sounded like far more work than the energy I had left in me. Instead, I made homemade Seitan and some Strawberry Salsa (pretty much same recipe as Pineapple Salsa only using strawberries).

Now I'm planning on enjoying the rest of the afternoon with good friends and some pool time. Happy Sunday!