By Heather Iacobacci-Miller June 02, 2011
Running & Boxing
Well, today there are no beach pictures to share. Jason got a tad bit pink yesterday, so we decided today would be our designated shopping day. Usually we take that when it rains, but there's no rain in the forecast.

I kicked off the day with 30 minutes on the treadmill then 2 combos from Cathe's MMA Boxing to hit the abs. I hadn't planned on running until I realized it was National Running Day. How could I miss out on that one? Oh, and in honor of the day, runners should really head over to Jessica's blog post for the day - To Run Is....

Shopping
After my workouts, I got cleaned up, had a quick lunch and then we headed to Foley, AL to the Tanger Outlet Mall. I almost always hit the jackpot at Ann Taylor Factory and sometimes Banana Republic Factory.

Today...not so much. It was a major shopping fail day for me. Well, I did find my new fave Nike running hat for 10 bucks and some awesome Nike running capris I can wear in the fall. Other than that, suckolla. Jason, however, hit the jackpot for the day. He came away with jeans, swim goggles, and 3 pairs of swimming trunks (which he needed).

After the outlet mall, we headed to The Wharf in Orange Beach, AL. This is our typical shopping day route. The Wharf has some fun beachy shops and restaurants. There's a restaurant that we've visited several times now called Ginny Lane. We were both feeling a bit hungry so we decided to stop in for appetizers.

Apparently today was just not meant to be for me. The menu had changed drastically and there was really nothing for me to eat and enjoy. Jason did get some fish tacos that he really really enjoyed. In fact, he liked them enough to start trying to figure out how to replicate them using tofu. Love it when he starts thinking like that - mostly because that's how my mind works all the time.

So today was definitely not the highlight of the vacation thus far. I guess I should have just stuck to the beach instead. Though, there are reasons why it likely failed in my mind. I'll confess, today I was having major body issues. I had way too many snacks at our friends' house before dinner, and a glass or two more wine than I should have had. So I felt really "blah" and fluffy.

Girls, you know what I'm talking about I know. So that didn't help when I was trying on clothes, that wouldn't fit right no matter what. Everything was just all wrong. It's frustrating when that happens and you're having a bad body day because you start to blame it on the fluff and not that fact that the cut, size, style is just totally wrong. Oh, and then there's the fact that I was soooo sure I was going to walk away with new outfits. Sigh.

I know I don't talk about it often, or ever, on my blog. But I know that we all go through these moments. I had a hard time pulling myself out of it unfortunately. How do you handle those "blah" days? And sorry for the downer post considering you should be reading about fun in the sand and sun!

Simple Dinner
Dinner was something super simple. I actually made it the other day so we could just have it on hand - Veggie Pasta Salad. I can't say it's really a recipe to be honest.

Basically, I boiled whole-wheat penne. When it was done, I tossed in a bag of frozen veggies and removed from the heat. After the veggies had thawed, I drained and put in large bowl. I added in a can of chickpeas (drained and rinsed) and some store-bought balsamic vinaigrette. And last minute, I tossed in some fresh spinach. 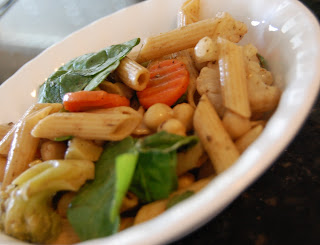 It wasn't the best thing in the world (in terms of flavor and creativity), but not the worst. I just didn't have the additional spices on hand that I would have added if I was home (like nutritional yeast flakes, red pepper flakes, and perhaps parsley and basil). And fresh veggies would have been preferable.

I did end up stirring in some roasted red bell pepper hummus to add some more flavor. But, hey, better than eating out right? Plus, it was enjoyed watching the ocean. That makes any dinner better in my book.