By Heather Iacobacci-Miller June 06, 2011
Sunday Weights
Sunday morning we got up early and headed to my sister's to pick up the pups. Maddie was a crazy loon, but both of them seemed happy to see us. When we got back home, I headed to the gym to meet up with a friend to do weights. I had really wanted to run, but the heat index was already in the 80's by 7:30 am. Not fun.

We started with about 15 minutes on the elliptical then hit the weights for back, chest, and triceps, followed up with some ab work. We did trisets as 3x8.

After some ab work, I hopped back on the elliptical for 10 minutes. My friend had to leave and get home and cleaned up. I know part of it was how the workout was set up, but man did I feel fatigued with the weights. Definitely not a strong day for me.


Pool Time & Socca Pizza Sunday
Jason worked on cleaning the pool out and mowing the yard while I was at the gym. When I got back to the house, I devoured my lunch and tried to straighten a little bit. Our friends were coming over and bringing their son for a bit of afternoon pool time. Yes, I should have been going to the grocery store, finishing laundry, and vacuuming the area rugs instead. But, we were still technically on vacation right?

We really were pretty bare in the fridge. I did have some chickpea flour and enough toppings to put together veggie socca pizzas (used some marinated & baked tofu I had from the trip, onions, green bell peppers, tomatoes, and roasted red bell peppers). Luckily, I had some Daiya leftover to top the pizzas with. 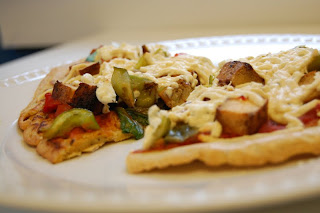 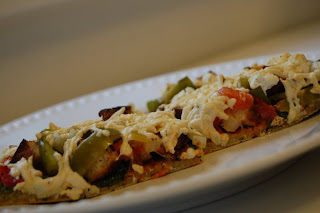 These turned out really well. I think cooking them on the pizza stones helps crisp them a bit more - which is what I prefer.

Monday Weights & Spin
This morning I got up and hit the grocery store then folded laundry before heading into work at 11. It was so difficult making that trek into the office. I had originally asked for the day off, but really wanted to save some of my personal time, so I decided to go on in. I knew I would have plenty of catching up to do.

After work, I hit the gym for biceps then spin class (did the class with my friend who I convinced to join the gym - YAY!!). I actually went with straight sets of 3x8:

My gym is moving away from the Group Ride format and back what they call "home grown." I'm a bit leery because I stopped going to those classes. It wasn't until they introduced Group Ride that I started getting back into spin. At least I had a friend to join me. That always helps.

Grilling
Since I was going to be getting home later than normal, Jason put dinner together. He had picked up some new potatoes on vacation, but we never used them so they made their way back home with us. I had thought that roasted potatoes and asparagus would go well with homemade seitan cutlets. However, I was out of them unfortunately. Definitely need to make some more this weekend along with some more veggie burgers.

He got a new propane tank for the grill so we didn't have to heat up the kitchen. I love grilled potatoes and asparagus. He made a simple Lemony Caper Sauce (basically just garlic, onions, white wine, lemon juice, minced red pepper, capers, and parsley). Since we were out of the seitan, he used Quorn patties instead and topped them with the Lemony Caper Sauce. 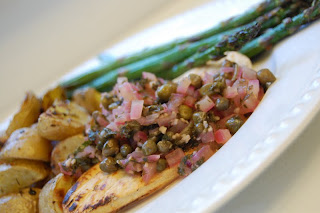 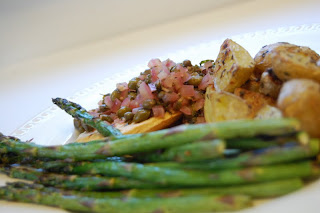 This was a nice, summery kind of dinner. Even better that Jason made it for me ;-)