Back in the Kitchen - Tofu Banh Mi

By Heather Iacobacci-Miller July 24, 2011
Sunday Gym Day
This morning I really had to force myself out the door to the gym. I would have much preferred a run outside. But, I chose sleep instead. This meant it was too hot by the time I got up to get out for a run. Thus, another gym day.

Thankfully, I do have the gym option, and once I got going, I was all good. It usually happens that way. I started with 15 minutes on the elliptical before working back and triceps. I went with giant sets of 3x8 then two burn out exercises at the end done to failure just for fun ;-)

I did another 15 minutes on the elliptical before calling it quits.


More Lazy & Time with Friend
A dear friend was in town - the same one I had a late lunch with a few weeks back. She was back in town one more time before she leaves to head home (East coast) tomorrow. She stopped by the house with her two kiddos for a short visit before meeting up with another friend. I had not had the chance to meet her kids yet. Well, I did see her oldest once when she was just a baby, but that was it, and that was about 9 or 10 years ago.

Her daughter was in love with Heath, and I think the feeling was mutual. She was laying on the couch with Heath at her side. Bad blogger alert - no pictures! We had a nice visit. She got to see the house in a much different state than the last time she was here. I wish she was around more often as she is an interior designer. Of course, this made me not want to let her explore LOL.

I really hate that she doesn't live closer. She's one of those people that the moment we met it was like we had been friends our entire lives. It just stinks when dear friends can't live next door.

I managed to finally get the rest of my suitcase unpacked and more laundry done. Other than that, I was fairly lazy. I should have gone to Whole Foods and Target, but really didn't want to leave the house to be quite honest. It was mostly cloudy today, so no pool time even. I actually sat on the couch and watched a bit of tv for a change though. That's such a huge rarity for me. I didn't even feel guilty about it.

Back in the Kitchen
As I mentioned yesterday, I had plans to try something new and creative for dinner tonight. Jason has been wanting a Banh Mi for quite some time now. He saw it on a Food Network show, and it's on a menu at a new restaurant down the street. So, he has been a bit fixated on trying one.

We got the ingredients needed finally. I did a lot of recipe searching. From what I can tell, it really comes down to a few basic staples (fresh jalapenos, fresh cilantro, a good baguette, daikon & carrot slaw), from there, it's creativity. So, here is what I came up with for my very first Tofu Banh Mi (mind you I've never tried one anywhere else).

Directions:
Using your food processor with the shredding blade, shred the daikon and carrots. Transfer to glass jars. Fill jars with rice wine vinegar and stevia (half bottle for each jar, 1 packet per jar). Seal the jars and shake well. Refrigerate at least 2 hours or over night.

To make the tofu marinade, whisk together all ingredients then pour over the tofu and allow to marinate several hours or over night.

Once the tofu is ready, bake at 400 degrees for approximately 45 minutes (until firm and crisp), flipping once. Cut into smaller rectangles.

To assemble the sandwich, spread on some of your cashew mayo then add in your tofu slices and top with fresh jalapenos and cilantro (I also added some lettuce). 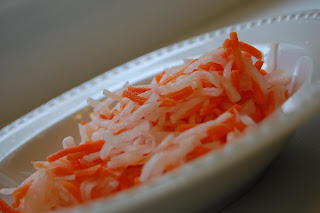 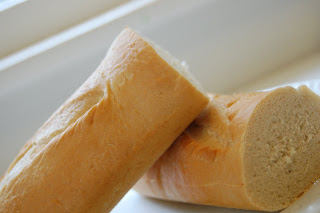 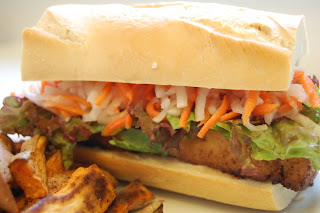 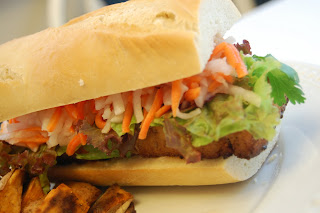 This was interesting. I really didn't know what to expect. I'm not sure I am a fan of daikon. I also don't just love cilantro, and you sort of need to like it. But, the other flavors helped to mellow out the cilantro. I guess I need to try one from a restaurant to compare and have some sort of baseline rating.

Do you ever try to make a dish based on something you've never tried?