By Heather Iacobacci-Miller July 28, 2011
Holy Hell - A Miracle Happened
Well I finally did it! I finally got my rear out of bed for an early morning run. It was a bit by mistake I'll admit. At about 4-ish, I rolled over and reset my alarm for my regular wake-up call...or so I thought. At 5:20, the alarm went off. Not sure what I switched, but it wasn't my alarm time apparently.

I will admit to resetting, thinking I could just doze for an hour. But I was awake and knew there was no way I'd go back to sleep. I took it as a sign and got up and got ready.

It was so hot and humid already. The minute I stepped out of the car, I knew it was going to be a tough run. There was not a bit of breeze to be had. It was already 80 degrees with 80% humidity. Thankfully the sun wasn't out yet at least.

I started my run just a little before 6. I promised myself 4 miles because I was sort of struggling at the beginning. Apparently leg day topped off with 3 days of spin equals sort, tired, heavy legs. Who knew? Luckily, my legs did actually loosen up around 2 miles into the run. That helped tremendously. Then all I had to do was focus on keeping the sweat out of my eyes. I was soaked, looked like I had probably swam in the river rather than run near it.

Mentally, it was a good run for me. It felt so great being outside, watching the sun come up. Definitely a great way to start off a day. I ended up with a grand total of 5 miles. Not too shabby for someone who was trying to reset her alarm huh?

When I got back to my car, the sprinklers were going still. I swear it was like hitting the jackpot. The only problem...they weren't spraying very high up - only hit about shin height. If no one had been around, I very well might have squatted down and splashed myself. I thought people might think it a bit odd if I started rolling around in the sprinklers the Big Dam Bridge though. ;-)

Super Simple Stir Fry
The one downfall of an early morning run is feeling like you've hit a wall by early afternoon. The endorphin rush can carry you only so far, then it's naptime. Only problem? Not exactly ideal to nap in one's office. I think that adults should get the naptime, not the kids. But that's just me.

I really wasn't feeling super energetic to get cooking this evening. We're starting to run low on a few things here and there, so meals require some thinking. I found some homemade seitan in the freezer and we had some fresh veggies to use. Jason suggested stir fry, so that's what we had.

I threw together a super simple sauce: soy sauce (used low-sodium), chili sauce, plum sauce, peanut butter, ginger, and a little bit of water to thin it out.

Just whisk it all together well and there you have it. You can make it as spicy as you want with the chili sauce or if you prefer sweeter, even add in agave nectar.

I chopped up broccoli, squash, zucchini, red bell peppers, and carrots and tossed in some frozen peas at the end. Super simple and didn't heat up the kitchen because I have my handy dandy electric wok. 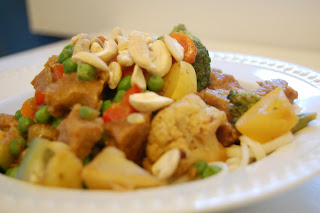 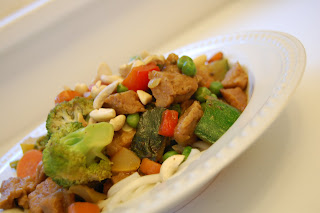 We served it over some rice udon noodles rather than rice. They take all of 5 minutes to cook, so they fit perfectly with a fast stir fry.