By Heather Iacobacci-Miller July 06, 2011
Two-on-Wednesday
Running
This morning's run almost didn't happen. I didn't sleep well at all last night. Maddie was up and about in her kennel then the ceiling fan started making a ticking noise. And you know once you pick up on a subtle noise, it's all you hear suddenly.

I finally fell into a fairly deep sleep at 3 and was woken by the alarm at 5:05. I'm not one to just loll around in the bed hitting snooze. So I hopped out of be and went straight for the bathroom to start getting ready. Jason didn't budge.

I stood there for a few minutes and decided, forget it, I'll do spin at lunch instead. I turned off the lights and reset the alarm. About 10 minutes later, I was back up and getting dressed for my run. I kept telling myself on the drive over to the Big Dam Bridge that I could just do 4 miles then maybe some pickups or hill repeats. But if I didn't feel like it. No big deal. I kept thinking I could do a faster 4 mile and that would allay any annoyance at myself for not doing the planned 6.

With my fast 4 plan in place, I took off at 5:45 on the dot. It took about half a mile to start to settle into a comfortable, but still working hard pace. My first mile wasn't anything to write home about, but I steadily increased my speed and got into a nice rhythm. The sunrise was gorgeous; I saw two bunnies and one armadillo. I received lots of friendly waves and smiles. At my 2-mile turnaround, I kept cruising along saying just half a mile so it would end up being 5.

I ended up hitting 6 miles in 52:30. Not race-winning speeds mind you. This was about my half marathon pace. I've not really worked on speed at all lately, been more focused on acclimating myself to heat. But at 5:45 am, it's hot, but not THAT hot so it's started becoming an excuse for slowing down (not that it isn't good to slow the hell down sometimes).

I think that if I had gone into the run with a set goal of a set pace, set time, then I wouldn't have allowed myself to go for it. I realized this especially after reading a great post by Alison @ Physically Philosophical. She mentioned how "I'll try" can actually be filled with " self-doubt and half-heartedness...no commitment." The caveat is in the attitude behind how "I'll Try" is said of course.  I mean, of course it really can mean that you're going to really try, but sometimes, it's really just words being said without meaning.

Today I didn't just try - I just did. I didn't let self-doubt take over. Sometimes I think we too-easily psych ourselves out thinking we can't lift heavier, run farther, run faster, etc. At the same time, we totally believe in others and encourage others right? I know I say, "I'll try" often and now I need to actually say it with conviction. Thank you Alison!

Lifting
Let's just say that by 9 am I was ready to crawl under my desk and take a long nap. All that energy the run gave me was gone gone gone. Part of the plan today was to hit triceps and abs at lunch. Of course, when all you want to do is sleep under your desk, you start to think about rescheduling the workout.

I ended up talking myself into it though. It really and truly did help with the mid-day slump. It wasn't a long workout either, so it was easier to talk myself into to be honest. Now, had it been back or biceps...probably wouldn't have happened. So here's the set up:

I did some ab work, which felt great as it meant I could lay in the floor ;-)

Must Use Corn
We had some corn on the cob that needed to be used. I had thought about grilling it up and serving with maybe sweet potatoes and bbq tempeh. I thought any extra grilled corn could go on a grilled veggie salad for tomorrow.

I sent Jason an email to see if that sounded good to him. His reply: "how about a grilled/roasted corn/veggie salsa medley in fajitas or quesadillas." Huh? corn veggie salsa medley? Sometimes I don't know who's worse about coming up with dinner ideas and being more complicated than necessary. We might be fairly tied on this.

I didn't really ask much more, I just prepped the corn when I got home. It was going to be grilled one way or the other, that much I knew. I was also so tired my eyes hurt so if he wanted to get crazy creative, more power to him.

He ended up grilling the corn, bell peppers, and onions. He spiced up the veggies with sort of a tex-mex mix of seasonings like red pepper, cumin, chili powder, garlic powder, cilantro, salt, & pepper. We had some Gardein strips that I had bought on clearance. I don't always use things like that, but when they're only a buck fifty, I snatch them up to keep on hand when I'm out of homemade seitan and such. 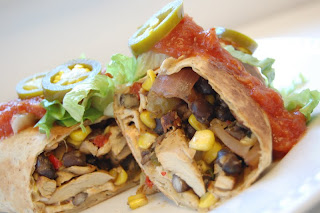 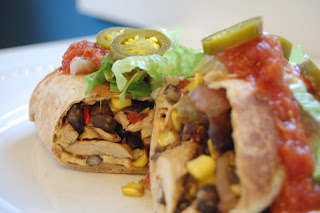 So basically this turned into a Grilled Tex-Mex Veggie & Chikn' Wrap that also included some black beans that he browned up with the Gardein strips and similar spices as he used with the veggies. He filled them with Daiya before wrapping up and browning and we topped with lettuce, salsa, and jalapenos.