By Heather Iacobacci-Miller July 13, 2011
Running & Flying
This morning we headed out for a run around 6:30 and it was already 84 degrees out. Talk about a hot, sweaty run. It was a tough run for me today. Not mentally, but physically. Nothing ever seemed to really click into place for me.

But, I think a bad mental run is way worse. And the physical wasn't like injury pain or anything, just super heavy legs, hard breathing (hello humidity), and lack of a good rhythm. But, I managed 6 miles at 53:10. Not too shabby as I thought I was going much much slower than that.

We got home and I stretched and rolled out for a while before getting myself cleaned up. We did still need to make sure everything was really packed, not forgetting anything important. We played with the pups for a bit. They knew something was going on. They actually thought they might be a part of whatever it was that was happening.

We got to the airport a bit earlier than we likely needed, but I get so nervous that it's best to get there and not feel rushed. It just never seems to get any easier for me. And I think taking the Ativan after the run, maybe being slightly dehydrated caused me to start getting a pretty major headache. Not much fun. But I just kept thinking that the flight was under 2 hours and when we landed we would be in Chicago where it was only 72 degrees.

Chicago
It was almost cold compared to the temps we left. At least lots of walking will help you warm up. We got settled into our hotel after a bit of a fiasco at the airport then trying to get on the train to our location. But no big deal really. One coworker's wife was on a different plane, different terminal then baggage in totally other terminal. We hit 3 of 5 for the day.

We were all starved and collectively agreed on Lou Malnotti's. Jason and I have been to Pizzeria Uno, but never Lou Malnotti's. It's been on Food Network and also highly recommended by friends. So, off we went. It was about 7 blocks from our hotel, so walking was totally doable. I will be honest, I don't like Deep Dish pizzas. I think maybe you do or you don't. Thankfully they did offer a thin crust option. 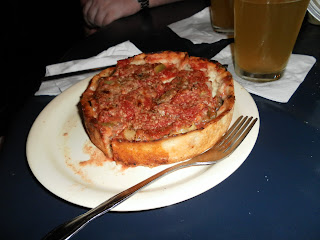 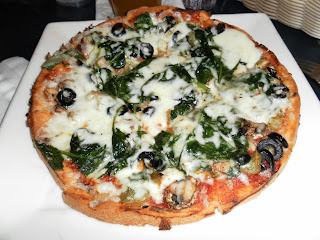 Jason got their personal deep dish - sausage. I got a thin crust and added spinach, olives, mushrooms, bell peppers. Oh, started with a house salad - nothing exciting, but green LOL.

After dinner, Jason and I made our way to Trader Joe's. I wanted to get some things that I could have for breakfast and lunch, and possibly dinner. It was a madhouse when we got there - just after work basically. They have some fantastic organic baked tofu that I got, along with hummus, salsa, Tofurky Slices, Ezekial bread, oatmeal, fruit, and a few other goodies. One fantastic treat I couldn't pass up was their Honey Sesame Almonds. Oh hello yummy! Can someone please open a TJs in Arkansas???

Right now we're just trying to relax after a really long day of travel and miles of walking (after the run mind you).