By Heather Iacobacci-Miller July 16, 2011
Friday Recap
Well, the much-awaited lake side run finally happened. However, it didn't go down quite as blissfully as I'd hoped. It wasn't a bad run, but a bumpy one I suppose. I walked 1 mile down to Millennium Park where we started the run crossing the bridge that takes you to the cross over to the lake.

We took a left and wound our way by the lake. It was so nice and refreshing. It was about 83 degrees with a nice breeze (about the same temps we have been having for our 5:30 am runs). So we were used to the temps easily. We got down to the Navy Pier and kind of lost the path so we ran down the pier. No biggy, just lots of people in the way. Girl running, move please ;-)

We stopped and took a couple of pictures and this is where it got more complicated. 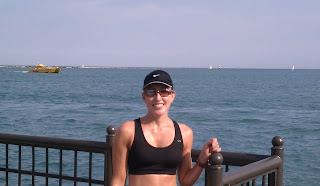 Jason's IT band stated hurting and he had blisters from our walk-a-thon yesterday. I told him I could run ahead then loop back. This would give me the miles and let him walk. But he kept running. We made our way back into the city running by the waterway, watching all the boat tours. But once we hit Michigan Avenue, it was pretty much a stand still.

We tried to zig zag around people as much as possible, but there was still lots of stopping and/or walking. We decided this was the interval training part of the run. In total, we ran 5.2 miles. So, 6.2 miles completed when you add in the warmup walk.

So, for me it was pretty good (even after being shit on by a bird), but no runner's high bliss. For Jason, not so much.

We got back, both stretched and rolled on the Triggerpont kit (yep, brought it with me) then got cleaned up. It was hitting 7pm and no dinner ideas. This is always a bad thing. We both were getting grumpy so I grabbed some baked tofu I got from Trader Joe's and said let's go. I was prepared to just get a salad anywhere.

Jason really wanted to eat near the river; I was convinced every place would be packed. I was partially right. However, luck was on our side and we got a table at South Branch Tavern and Grille. We were really glad to score an outdoor table, but it was so incredibly loud. Apparently it's the trendy, hip Friday hangout. I felt insanely under dressed and old! 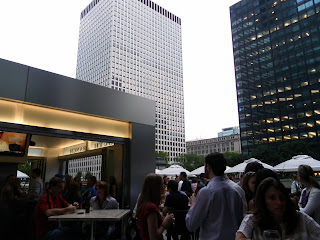 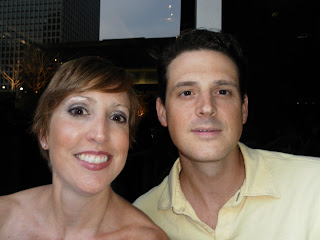 But we were starved and done walking. We started with their red bell pepper hummus. 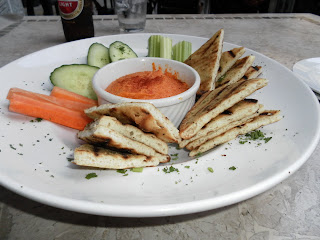 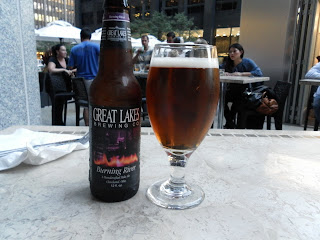 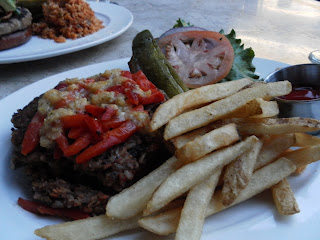 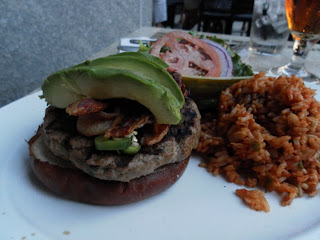 My burger was really quite tasty, definitely homemade and not some frozen something or other. The corn vinaigrette was really interesting. My only disappointment was that they were out of sweet potato fries.

Lots of Walking Saturday
Today I got in a 5-mile treadmill run. Oddly enough, it was a pretty good run. I did 2 miles at an 8:49 pace then 2 miles at 8:34, then 1 at 8:49. After my run, I ate and cleaned up. We had planned on the lake today, but it was a bit overcast. So, we hit State Street for some shopping before heading to the Lincoln Park Art & Music Festival.

I scored a shirt and cool pair of shoes at A'Gaci, but was disappointed with most of the shops. I had high hopes for H&M. Jason found some shoes at Nordstrom Rack. We dropped the goods off at the hotel and hopped on the train to head to the festival.

I knew the Gardein truck was going to bet there - kind of excited to see them and sample some goodies (and score coupons). We got there around 2-ish so it had all just gotten underway really. But it was really nice out, not too hot (for us anyway). There was a nice breeze and the vendors were on a nice tree-lined street. 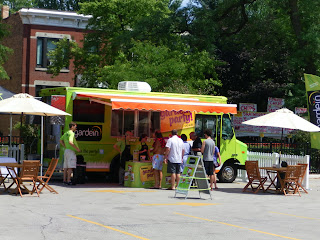 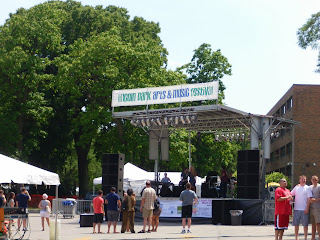 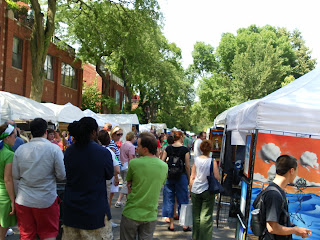 We were starving so found a restaurant just outside one end of the festival area called John's Place. It looked nice and had outside seating. We started with the hummus then I got the Tofu Sandwich with the mini apple, cranberry, spinach salad. Jason got a grilled chicken sandwich with sweet potato fries.


I will say I was disappointed in my sandwich. The tofu was completely bland and flavorless. I ended up pulling it off the sandwich and putting it with the salad. 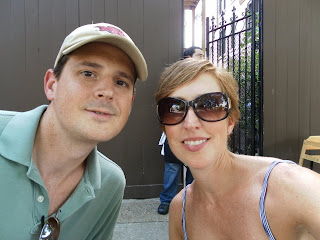 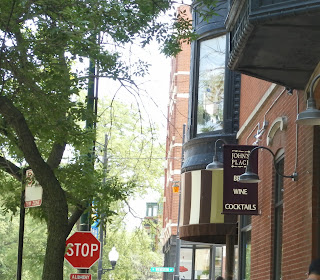 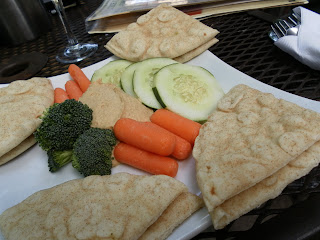 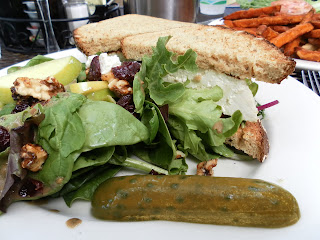 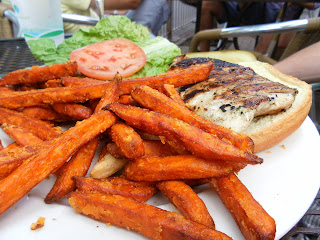 After lunch, we headed to Lincoln Park and wandered around the zoo. I will say, by that time I was getting cranky because my feet were killing me. And honestly, the zoo made me kind of sad. It was really hard seeing the animals caged up and pacing back and forth. However, the greenery of the area was so nice and relaxing. 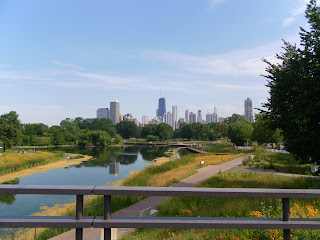 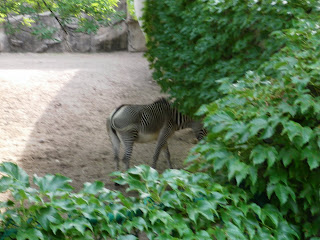 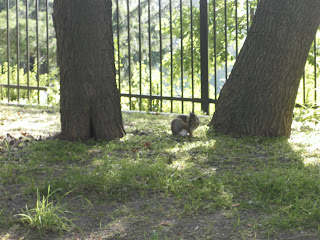 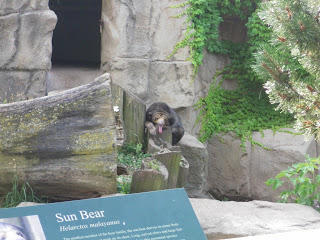 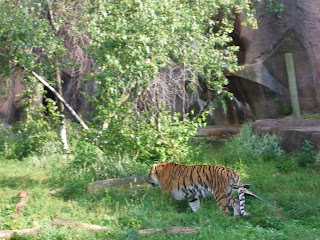 We made our way to the Hancock Tower, more specifically the Signature Lounge on the 96th flour. For the price of going to the observatory deck, you can get 2 cocktails instead and enjoy the same views. Jason got a Hendrick's Gin Martini and I got a Mango Madness Martini (delish). 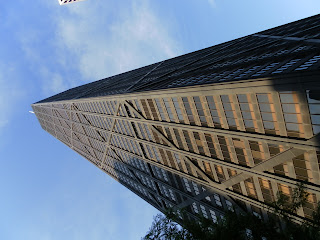 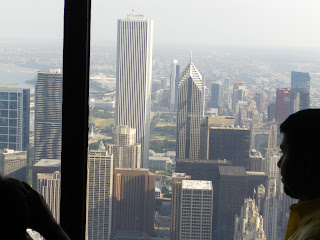 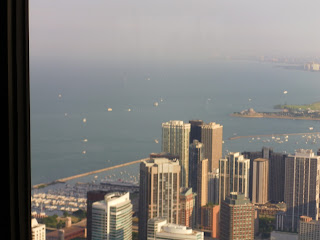 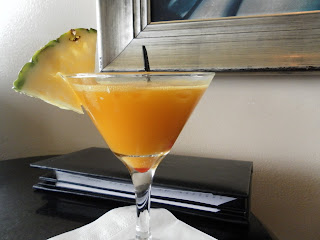 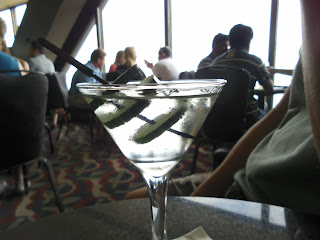 Oh, another tip, the women's restroom has incredible views! 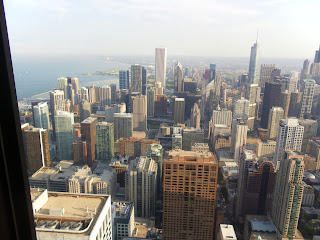 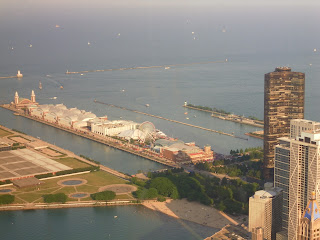 It's been a LONG day with lots of walking. Yes, we've both gotten a little grumpy over the course of the day, but over all, it's been a good one that I wouldn't trade.