By Heather Iacobacci-Miller July 10, 2011
Saturday Recap
Wow, yesterday was kind of nuts, but so worth it. As I mentioned, it started off with an 8-mile run (so proud to hit that mileage again). Then it was a rush to get myself ready to head out for the lake. Yes, I had to shower before going to the lake - encrusted in salt and grime from the run. Ick.

We got to the lake around 9:45 and pretty much immediately headed out on the boat. A and C couldn't wait to go "monster" tubing with Uncle Jason. He's such a trooper to take them out. 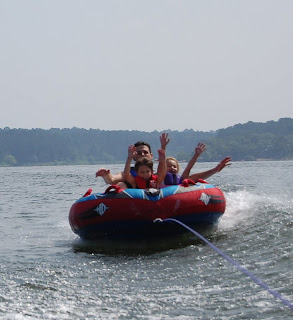 This year he talked to them about needing to practice falling out of the tube so they would be prepared in case they ever bounce out. To our utter shock, A and C both jumped out of the moving tube! Even more shocking, they came up laughing asking to do it again. I think Jason created monsters ;-) 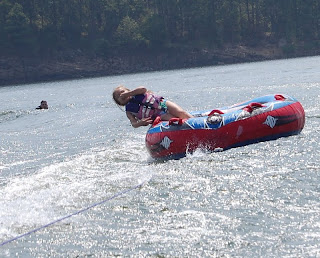 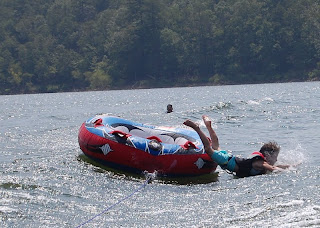 We finally convinced the kids that they needed to take turns - in other words, let other people get out there and do something like ski. I will say, skiing after a long run is a bit more challenging and tiring. Can we say second workout of the day? 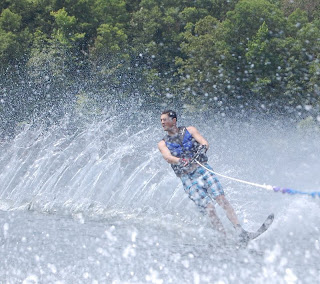 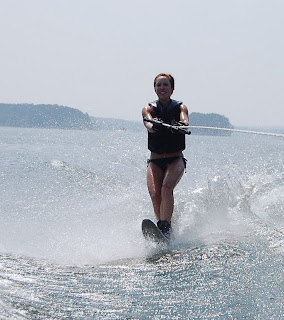 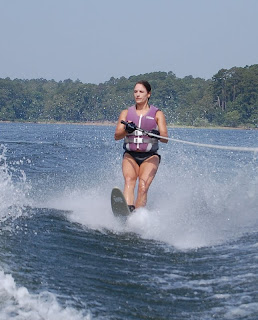 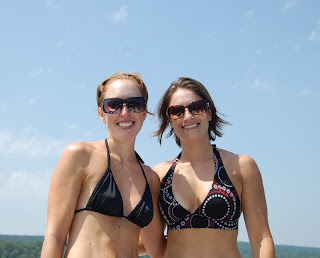 After everyone was sufficiently water logged and worn out (and starving), we headed back to the shore for lunch. Unfortunately, we had to leave right after lunch to head back home so I could meet up with my friend for an afternoon snack at a place called Capis. I had never been, but had heard good things about it. My friend got an appetizer called an Avocado Bomb and I got their signature salad (minus bacon). The food was good, but the conversation far better. I had such a great visit with my friend, though 3 hours was definitely not long enough.

We had a birthday party to get to by 6:30 for one of my dear friends. It turned out to be a really nice party. I didn't take very many pictures actually. Just a few with the girls (minus 2 others who showed up a little later that I didn't really know) 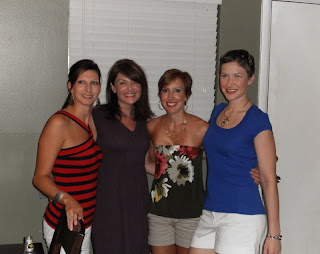 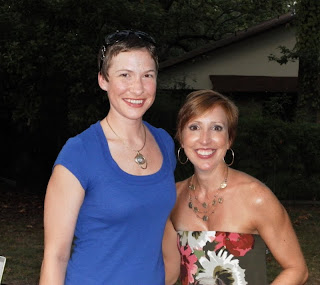 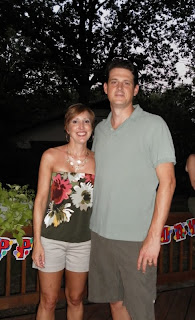 So, busy day, but one filled with family and friends.

This morning I slept in until 8:30! Woohoo!! That's so late for me, but so deserved I believe. I didn't rush around after getting up either. I tried to play catch up on blogs and such before heading to the gym around 10am.

I'm leaving for Chicago on Wednesday and won't have access to weights for 10 days. So, I'm trying to get all my weight work done by Tuesday. That meant a longer workout today for shoulders, biceps, legs. I went with supersets of 3x8 unless noted.

I stretched for a bit before heading home and going straight for some pool time after my post-workout snack. Surely I deserve the pool time after all that right? So today is a more lazy, relaxed day for us. Much needed actually.