By Heather Iacobacci-Miller July 05, 2011
Spinning & Soap Box
Last night I set out my running gear in hopes that I might actually be up for an early morning run. I woke in the wee hours, looked at the clock (4:10 am) and decided pretty quickly that I needed to reset the alarm for a more manageable time like 6:20.

In other words, there was no morning run today. Instead, I went to my backup plan, which was spin class at noon. It was a good class today - major sweatfest going on.

It is so incredibly frustrating to watch someone just piss away their workout like that. There was on girl back from maternity leave. She didn't leave her bike once, nor did she just stop and sit there. She admitted she was struggling and having to use low resistance, but she was freaking working her butt off regardless.

Anyway, I'll step far away from that soap box. To each his own I suppose. Does it annoy you to watch people cheat themselves during workouts? Do you find it rude or disrespectful to an instructor?

Summery Spaghetti Squash
Yesterday I bought spaghetti squash and really wanted to use that tonight. I've been loving spaghetti squash since I figured out that I had been over-cooking it previously. And it's not that I didn't like it before that's the funny part. It just holds up more like pasta as I had been envisioning.

Do you think of spaghetti squash as a summery dish or more fall/winter? I know I mentioned previously that I thought of it as being light and summery, but had a commenter say the opposite. Maybe it's the yellow color that makes me think of a bright summer day?

Anyway, since it's full on summer I didn't really want a hot dish. So I went with something I made a few weeks back, Italian Tofu and Spaghetti Squash. The only thing I did different was add in some artichoke hearts and I also add in some ground flax to the tofu breading. 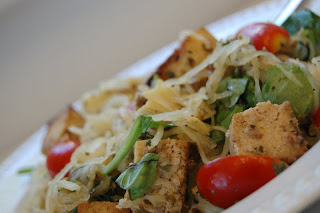 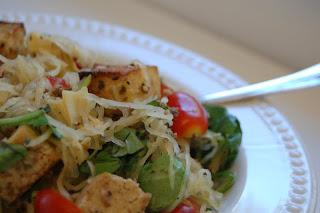 The funny thing is that I really am not much of a tomato fan unless they are cooked. But I have found that I do like the smaller tomatoes and the heat from the spaghetti squash does help to ever so slightly cook them.