By Heather Iacobacci-Miller August 26, 2011
Since tomorrow is our 11-year wedding anniversary, I thought today would be Fun Facts Friday - Anniversary Edition.
So, even though the wedding wasn't fancy, it was spectacular to us. Everyone enjoyed themselves and that's what we wanted the most - a party to celebrate our lives together. Because it was a small affair, we were able to really visit with everyone, sit down and enjoy dinner, dance, sing, just have fun. Very unpretentious. No receiving lines and formalities.

And you know what? The actual wedding doesn't really matter in the end does it? It's over, the mess gets cleaned up. Presents opened and put away. Life moves in a forward direction. We eventually sold the townhouse, got new jobs, bought our current home, have lost two furbabies, adopted two more furbabies. Seasons come and go. Times can be rough, but they can be good. And eleven years later, Jason is still the love of my life. 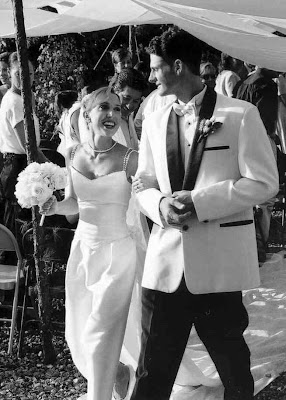