By Heather Iacobacci-Miller August 01, 2011
Last night I wasn't in the mood for cooking to be completely honest. I was ready to go with veggie burgers and sweet potato fries. Jason kept searching the cabinets, fridge, freezer, cabinets again. I could tell burgers and fries wasn't going to cut it.

I told him if he wanted to get creative, then go for it. About 20 minutes later, he was still searching. Last week he had mentioned making Italian "Beef" Sandwiches as we hadn't had them in a while. I was out of homemade seitan though, so we went on to something else.

Thankfully last night I had a backup for the seitan. I had a $1 off coupon for Gardein products that I picked up at the Lincoln Park Art & Music Festival in Chicago from the Gardein Party Tour Truck. So, when I was a the store over the weekend, I picked up some Gardein Chik'n Strips.

They ended up working perfecting for another version of Italian "Beef" Sandwiches. Yes, they are supposed to be a "chicken" sub, but I am quite doubtful they taste anything like chicken (not that I would know mind you).

Directions:
In a medium sauce pan, cook the bullion cube per package directions. This will reduce down.

In a large non-stick skillet, saute onions, green bell peppers until begin to soften then add in the garlic, spices, pepperoncini, and Gardein. When the onions begin to become translucent, add in most of the liquid, reserve some to add if gets too thick or use later. Allow to simmer and thicken. 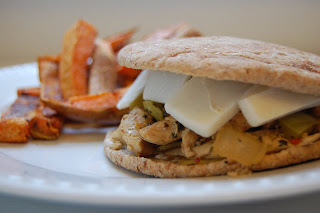 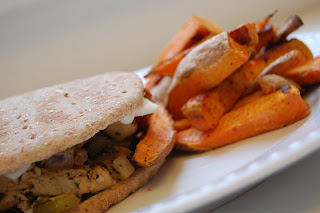 This turned out really well. You could really taste the peppers, onions, garlic and just the right amount of heat from the pepperoncini peppers. I think a mushroom broth would work really well too.

Spin Day
Today my legs were talking to me after two days of fairly intensive leg workouts: running 8 miles on Saturday then leg day yesterday. What do I do? I hit up spin of course.

I started off with back and triceps. I was running short on time so I went with two exercises for each muscle group done in supersets:

Then it was off to spin. And it was a tough one for me today. It was super hot in the gym, and my legs were revolting against me. But, I got it done.

Simple Salad Dinner
I really wasn't in the mood for being terribly creative in the kitchen. I think the heat is zapping my brain. I guess when the heat index is 112, you really don't feel like moving and doing too terribly much.

We had lots of fresh veggies on hand, so I went with a repeat of last Tuesday's Roasted Tempeh & Veggie Salad. I did make a little bit of a different marinade for the tempeh though. I used some balsamic vinegar, OJ, agave nectar, and Dijon mustard for a quick sauce. I brushed a little over the portobellos as well as they were roasting. 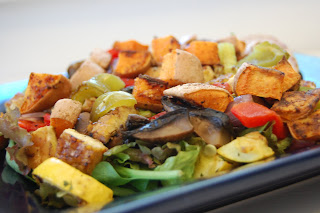 Sometimes you just have to go with the tried-and-true. May not be anything super special or creative, but it tastes great nonetheless.