By Heather Iacobacci-Miller August 29, 2011
Sunday, Gym Day
Why do vacations and min-vacations go by so quickly? Just doesn't seem quite right. Anyway, we left Branson around 9:30 am to head back home. It was a pretty uneventful drive back, which is usually a good thing. We got home and unpacked, then I headed up to the gym.

I started with a 10-minute treadmill run to warm up before hitting the weights for back and light legs then abs. I went with a giant set for back then supersets for legs.

I did some ab exercises, stretched, and called it quits.

Lazy = Crazy Dinner
I may have made it to the gym and washed a few loads of laundry, but I never made it to the grocery store - lounging in the pool trumped grocery shopping. This meant getting creative with dinner.

We had another package of the Field Roast "Sausages" in a Mexican Chipotle flavor. So, we ended up with hodgepodge kind of meal I'll cleverly call Tex-Mex Mishmash. It consisted of: Not Really Refried Black Beans, Tex-Mex Tomato Quinoa, Mexican Chipotle "Sausage" Skillet.

Directions:
In medium sauce pan, combine all ingredients and allow to simmer on medium-low heat until thickens then lightly mash.

Directions:
in large, non-stick skillet, saute all ingredients until the onions are soft and the "sausage" is browned.

Note: The flavors in the "sausage" were strong enough that there was no need to add additional seasonings. If using a different product, you may want to add chili powder, cumin, cilantro

Directions:
In saucepan, combine all ingredients and bring to a boil. Lower the heat, cover and let simmer on low until all liquid is absorbed by the quinoa. 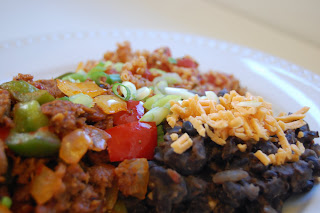 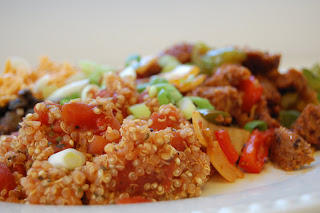 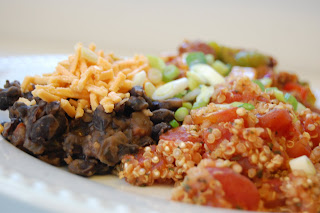 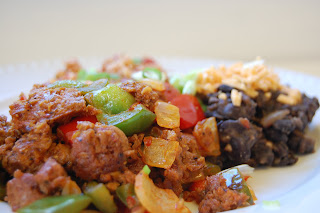 I topped the black beans with some Daiya Vegan Cheese and sprinkled on some green onions (optional). It all started off separated on the plate, but I ended up mixing it all together in the end. The Mexican Chipotle "Sausage" Skillet would be great in a tortilla or in a taco salad bowl as well.


Normal Monday = Spin
Today was a fairly typical day for me in that I hit up spin at lunch. What wasn't typical was that Jason made an appearance as well. I know this sounds silly, but I love working out next to him.

It's not like we're talking even, but it's just fun to be at the gym together. Though, he might not fully agree on the "fun" part of it.

I did manage to fit in shoulders before the spin class too. I just went with the same workout as last week doing a giant set of 3x8:

Overhead shoulder press
Lateral raise
Front raise open to T (front raise all the way overhead, rotate palms and open arms to T then bring all the way down to start)

More Lazy = Another Creative Dinner
I had thought I might go to the grocery store after work, but thought twice. I remember my last Monday after work trip, chaos. So, while we needed groceries, I was not up for the hassle.

Originally I thought I might go with stir fry for dinner. That was simple and I had all the ingredients. I asked Jason what he thought and the next thing I know he's planning a meal with some sort of apple gastrique that then turned into an apple salsa. Only flaw is we didn't have enough zucchini (or any other veggies for that matter) to make up a veggie side.

So what do I do? I go with something crazy again. But, I will do you all a huge favor and save that recipe for tomorrow since I already have several going on. I will say it involves cannellini beans, tofu, and pasta.