By Heather Iacobacci-Miller August 06, 2011
Holy Sh*t It's Hot 7 Mile Run
I had thought I was going to take my workout to the gym today. Had it pretty much planned out, and was looking forward to sleeping in. What happened was that I woke up, wide-eyed awake, at just after 7. I had been feeling stupidly guilty for not attempting another morning outdoor run, blaming it on the heat. So I decided to redeem myself and get out there for a run.

I brought along extra water in my cooler for post-run. I had a GU packet stashed in my pocked just in case. I was planning to just go slow and see how long I could go. I planned for at least 4 miles and hoped for 6 tops. No looking at my watch was my first rule. Forget about the time, just take it slow and easy.

Thankfully there was a breeze today. That made such a big difference. Of course, it was already 90 degrees out so making a difference is a bit relative of course. I actually felt really pretty good for the first 3 miles. So I ended up pushing just a bit farther. On the return, however, I started to really feel the effects of the heat. I took a few walk breaks for a few reasons. One major reason was to force myself to slow down. I kept creeping up with my speed and my heart rate was hovering at 178-180. That wasn't the plan at all.

I remembered, however, why I typically don't take walk breaks - It is SO hard to get moving again. But I knew I needed to take the breaks today. I could feel myself overheating, and feeling far more fatigued than I should have felt. Sometimes you really really must listen to your body. Pay close attention to what it's saying to you. I tried my best to play it smart today - well as smart as I could for a dodo head running in 90+ degree temps.

Somehow, I managed to eek out 7 miles. And surprisingly, it wasn't that bad of a run for me. It was more physical fatigue. And honestly, I'll take that over a mentally crappy run any day.

I finished off 10 oz of Gatorade before stretching and cooling down then 2 more water bottles as I stretched then drove home. When I got home, I hit the Triggerpoint kit hard. My IT band was really tight and aching and my calves were just on fire.

Shoes, Shoes, Shoes, Purse
After recouping a bit, I hit the pool for the ultimate post-run recovery treat. Jason joined me for a bit, but quite honestly, it was even too hot for the pool. But it was relaxing; very nice to just float around and doze for a bit.

We both got cleaned up and headed out for a couple of errands - to include a trip to DSW. I had rewards certificate burning a hole in my wallet plus it's a tax-free weekend for us (school "supplies"). I had also been tweeting with Brynn from Balancing B about nude colored Jessica Simpson heels that she had found at DSW.


I've been on the hunt for nude heels for quite some time. Brynn found the perfect pair - and they are pretty sweet if I say so myself. And it was fate - they had 1 pair in my size! I wear either a 5.5 or 6 and it's rare that stores have more than 1 or 2 pairs in that size in stock. So it was a major score for me. 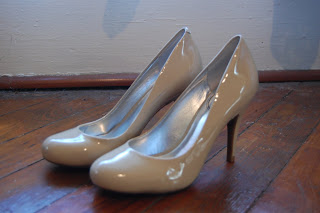 Oh and more major score? Yesterday after work I made a stop at TJ Maxx and found the perfect red purse and 2 pairs of shoes (1 clearance for 10 bucks, the black pair). 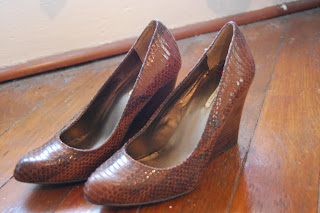 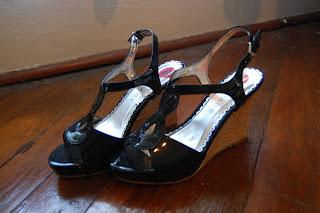 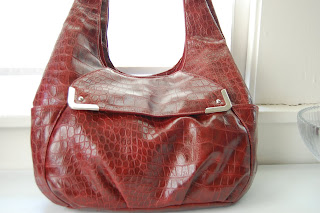 Re-Fueling
After the shoe shopping (Jason found some too), we headed to Bar Louie for a super late lunch. We were both getting super hungry and wanted to try something different for a change.

The only time he had been to a Bar Louie was one year when we were in Branson, MO. I've been to the one here once with some friends, but we've never been together and eaten. I ordered a grilled veggie wrap minus the pesto mayo. It was good, but the wrap was greasy so I just pulled out the filling. Jason had a messy shrimp po boy that he seemed to thoroughly enjoy.

The food was good, but they are a little proud of that food. But it was worth it. We just relaxed, ate, chatted. Perfect way to wrap up shoe shopping ;-)

The minute we got home, I ran upstairs and changed into comfy lounge clothes and tried on my new shoes. Jason called up and asked what I was doing. I didn't say anything and he started laughing and said, "You're trying on your shoes aren't you?" Well of course! That's like the law isn't it??? He ended up modeling his new shoes too of course.

So far, it's been a pretty good Saturday. I have a feeling the rest of the evening will be a fairly lazy one though. It's too hot to be outside (all curtains shut tight even). We're both stuffed and feeling incredibly lazy. We have a couple of movies, so it'll probably be a movie evening for us.

I hope you all are enjoying your day!