By Heather Iacobacci-Miller August 02, 2011
Two on Tuesday
Running
This morning I got myself up and out the door for a morning run before 5:45 am. It was already a muggy 84 degrees when I reached the Big Dam Bridge. It was also very very dark. I guess I wasn't paying attention to the fact that it's staying dark longer now. I'll be honest, there weren't nearly as many people out and I was a tad nervous. But, I did have on my Brooks reflective shorts and an ankle band.

So, back to that run...the first mile my right knee was hurting, not the IT band kind of pain either. It was a very strange pull up through my inner thigh. I thought I was going to have to cut the run short, but it ended up loosening up and was fine around mile 1. And despite that, miles 1-2 were really great (sweaty, but good).

At mile 2, I got into a fight with some insect, perhaps a bumble bee. It kept circling me, buzzing my face. That totally threw me off. My heart rate went crazy, I lost all rhythm. So the 3rd mile really sucked for me. I just couldn't get myself back on track. I started noticing the heat, the humidity, the non-stop sweat pouring down. It felt like breathing water. The more I thought, the worse it got.

I did manage to regroup, relax, chill the hell out around mile 4, but going into mile 5, the heat was just kicking my ass to be flat out honest. It was taking a major toll on me mentally and physically. I came so close to stopping with only a quarter of a mile left. But I refused to give up and managed to eek out just shy of 5.5 miles. Not the best, not the worst. It was what it was and I felt accomplished.

Lifting
During my lunch break, I went home and got in a short weight workout for chest plus abs. I almost put it off, but decided to go ahead and get it done because it would be a short workout.

I finished with abs from Cathe's High Reps DVD.

Hot as Hell - Literally
Walking back to work was downright miserable I must say. I shouldn't have bothered cleaning up after my workout. In fact, I was probably sweatier. We are known for having hot hot August weather. But this is bordering on extreme. Your skin sort of hurts being outside right now.

Here's what the temps looked like at 3:30 pm. See that "feels like" temp? Yes, it really does say 118 and tomorrow is supposed to be 109 not including the index: 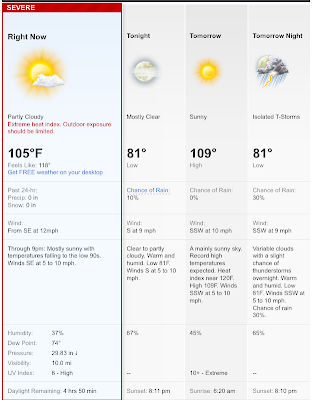 How are the temps where you are? Are you in this same circle of hell?

Dirtying up Dishes
I haven't honored Taco Tuesday in a good while. I thought tonight would be a fairly simple taco salad bowl. The other option was to make some garlicky tomatoes as a sauce for some seitan cutlets. Since I had my workouts out of the way, the plan was to make seitan to freeze.

Jason decided that sounded better - the Garlicky Tomato Sauce over seitan cutlets. Ok, now what about sides? His response: "baton of zucchini, with a little herbs and spices." Why of course, because I make batons of zucchini regularly. Of course, this was just a challenge waiting to happen.

I started searching the cabinets for inspiration. I was out of panko to make a crunchy zucchini. However, I had brown rice flour and for some reason I decided that would probably work well. So I came up with a gluten-free, vegan breading for Crunchy Zucchini & Squash Batons (had to use that word right?).


Directions:
Preheat oven to 400 degrees. Prepare a baking sheet or use a cooling rack stacked on a flat baking sheet.

Whisk together the flax egg and almond milk in a shallow bowl.

Drop the veggies into the wet mixture, then toss into the dry mixture. Place on your prepared sheet or rack. Bake until crisp, approximately 30 minutes.

When Jason saw the zucchini and squash in the oven, he said, "oh, I thought you would do that in a pan. I thought he meant crispy, he really just meant sauteed. Oh well, tried something new right?

Options: you can add in fresh basil or spinach to this sauce. For a richer sauce, add in 1-2 tbsp tomato paste.

I will say this sauce worked well over the homemade seitan cutlets. It's really a favorite sauce. I actually have used this sauce for lots of different recipes from Garlicky Tomato Basil Spinach Barley to Spaghetti Squash with a Garlicky Tomato, Kale and Chickpeas. I love a really good, versatile and easy sauce. You can even roast the tomatoes in the oven for a roasted sauce.

I served some couscous with spinach on the side. I only had a boxed variety with it's own herb packet, but essentially cook up the couscous in a vegetable broth with your favorite herbs and toss in spinach at the end. 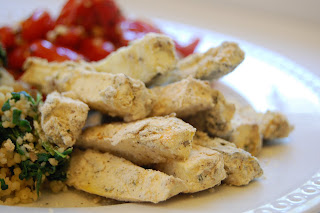 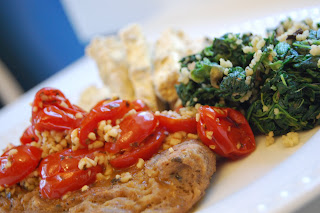 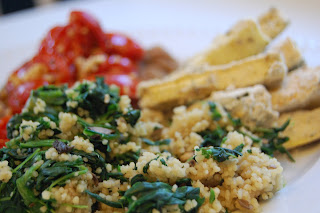 Essentially tonight was a "let's see how many dishes I can dirty up for dinner" kind of night. Of course, if you already have your seitan made, then it's not nearly as bad. The tomato sauce does come together quickly and couscous only takes about 10 minutes tops.

I will say that the zucchini and squash were ok, but nothing spectacular. I think I could have seasoned the dry mix more. They would, however, be really great for a party with a creamy dip to go alongside.