By Heather Iacobacci-Miller August 18, 2011
Dark Morning Run
This morning I got myself up and out the door for an early morning run. It's getting harder though now that the sun isn't coming up until mid-run. For starters, it makes me a little nervous to be out there by myself. There are usually cyclists, a few, but not as many runners until the skies begin to lighten up. So, finding a good running time is now on the shuffle for me - not sure how to run before it gets too hot, when it's light enough, and still get to work.

Anyway, it was about 10 degrees hotter this morning and the humidity was definitely up there. Not nearly the pleasant, chill bump inducing weather from Tuesday. But at least it wasn't 90+ degrees with blazing sun right?

I set out thinking that I might do 4 miles then some hill repeats. I quickly realized there were not going to be any hill repeats though. My legs were feeling pretty heavy from spin, run, spin this week. It could have easily been a rest day for me actually.

But, I was out there. I decided to try for a slightly faster 5.5-miler rather than any repeats or intervals. I really didn't have any way of gauging speed other than my heart rate, but that can be tricky too. I've noticed that as the dew point and humidity increase, so does my heart rate - or it seems to be the case. Maybe I'm pushing harder and I don't realize? Sometimes I think it can be a good thing to have the fancy gadgets so you do know your speed and distance. Sometimes they can be a hindrance too.

Despite heavy legs and high humidity (aka non-stop sweating), it was a pretty good run overall. And, it was a good way to start the day.

Easy Dinner
By about 11 am, I was beginning to crash big time. There was not going to be any double workout today. In fact, just staying upright was going to be my biggest challenge. It is really rare that I get super tired during the day. But today, I was so tired I had a headache and was beyond grumpy (even clumsy and broke a candle holder). So, instead of abs or any other workout at lunch, I went to Target.

I had been putting off the Target trip for several days, so I decided to just get it done today. I thought maybe walking around would help wake me up a little as well. Jason got his hair cut (it was out of control) next door to Target while I did the shopping.

Target can be so distracting I must say. I did very well, however, and only bought the items on the list. That deserves a gold star for the day I do believe.

As a reward for my run, getting an errand done, AND not buying anything off the list, I went with another easy easy dinner tonight: Lentil & Quinoa Burgers (based off the Lentil & Quinoa Sliders), which I had stashed in the freezer and baked sweet potato fries. 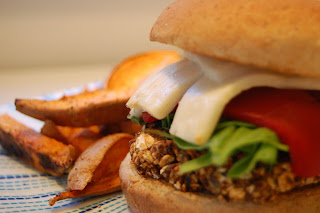 I even went with my typical "burger" toppings of roasted red bell peppers, fresh spinach, and vegan "cheese." Sometimes sticking to the basics is just the way to go.

These were the last of my homemade veggie burgers unfortunately. Guess that means I need to spend some time in the kitchen this weekend. And speaking of time in the kitchen - I need your favorite chia seed recipe. I finally got a bag and don't have a clue what to do with them. So send your recipes my way please. I will do my best to create a list and link back to all of them.