Running in the Rain and Spaghetti Squash

By Heather Iacobacci-Miller August 09, 2011
Dedicated or Crazy?
Last night we had more storms rumble through the area. We desperately needed the rain and the cooler temps it brought (went from 107 to 75!). Though, Heath Man would really beg to differ. Poor guy is just terrified of the thunder and lightening. So, it can make for a very long night for everyone.

I had talked Jason into getting up for a run. Alarm was set for 5:15, clothes set out, water bottles filled. I woke up and realized it was still raining. Um, no, not supposed to be raining. Annoyed, I got back in bed, but I couldn't go back to sleep. I thought I'd check again...it had stopped. It was a sign right?

Jason begrudgingly got out of bed and we both got ready. And then it started raining again. So he pulled out some rain jackets (they are running or cycling jackets so light weight at least). Oh and it was only 71 degrees out so the jackets didn't seem like a terrible idea.

We got to the Big Dam Bridge right at 6 am. Still dark and drizzly. The sun is definitely coming up much much later now. We heard a few rumbles of thunder and then there was some lightening. Yes, I know, lightening can travel and all that. So we weren't the smartest about this I'll readily admit. But we were there so off we went.

We passed a group of high schoolers running, but other than that, it was pretty empty. Jason made a stop at mile 1. He was planning to catch up to me on my loop back. About 1.5 miles in, the rain started to pick up, and the thunder grew louder, the lightening brighter. Ok, now I was getting a bit worried. I went just past the 2 mile mark (2.1 miles) then circled back. Dang dang dang. The temps felt so good. The rain was just fun. Why did it have to be storming? It's been SO long since I've felt 71 degrees. I could have run all day.

But I knew I needed to get my butt back to the car ASAP. We ended up passing 2 more people who were thoroughly enjoying the temps as well. I mean seriously, how can you pass up 71 degrees when the coolest it's been is 84? Exactly! Anyway, the rain and storms let up at about 1 mile remaining. Go figure. That's ok though, my feet were feeling soooo weighed down with my super sloshy shoes. That has to count as some sort of extra workout I think.

In the end, I managed to squeak in 4.4 miles. And running in the rain never felt so good. What's funny is that until I fell for running, you couldn't have paid me to run in the rain. If it looked like rain I wouldn't have gone out. Times sure have changed ;-)

Triceps Tuesday
During lunch, I decided to get in my triceps workout that I skipped yesterday. I went with a giant set of 4x8 with the exception of the dips which were 4x10:

I also got in abs from Cathe's Power Hour DVD. Short and sweet kind of workout.


Spaghetti Squash Night
I had some cherry tomatoes that needed to be used up quickly. For a great summer dish, I love pairing them with spaghetti squash. I went with a spin off my Italian Tofu and Spaghetti Squash (didn't have tofu pressed or even thawed for that matter). I added in artichoke hearts, fresh spinach, edamame and chickpeas.

In large bowl, add in tomatoes, spinach, artichokes, chickpeas, edamame, dash of salt and pepper, basil, oregano. Stir in the hot spaghetti squash. This will help to wilt the spinach. Then add in the dressing and mix well. Allow to marinate at least 2 hours or over night. 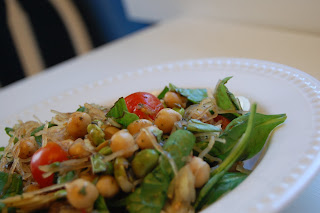 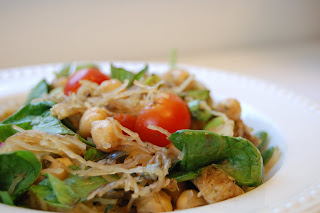 This is just a nice, light summery dish to me. It would make a great side as well if you were feeding a lot of people. We definitely have leftovers even using it as a meal.