By Heather Iacobacci-Miller August 14, 2011
Snacky Saturday
It took a long time for either of us to start thinking about dinner last night after our lunch yesterday. We were so full and lazy the rest of the day it just wasn't even funny. I knew dinner needed to be something on the light side. Jason suggested a snack plate of sorts.

Of course I never do anything super simple. That'd just be too easy right? We had plenty of fresh veggies and some frozen tofu. We also had some rice wraps, which I never think to use. So, I decided to go with baked tofu and spring rolls.

Directions:
Simply whisk together all ingredients. Pour over tofu or use as a dipping sauce.

When using as a marinade I will say that I think using frozen then thawed tofu is ideal for this recipe. It soaks up the marinade much faster and bakes up with a nice crispy outer layer.


For the Spring Rolls, we used a mandoline to thinly slice zucchini, squash, and carrots, then thinly sliced some red bell pepper. Tossed the veggies in a large bowl and seasoned with dried mustard, Chinese five spice, cilantro, salt, pepper, garlic powder, rice wine vinegar and just a splash of sesame oil.

We let it sit while the tofu baked then rolled it up in the rice wraps. I used the same ingredients for the tofu marinade, only made it slightly thicker, as the dipping sauce along with some soy sauce. 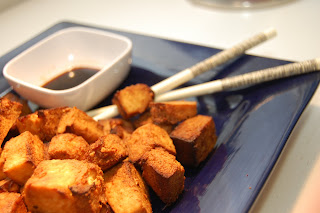 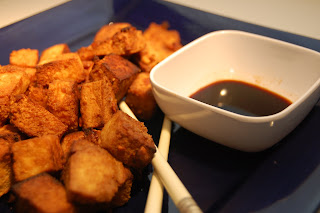 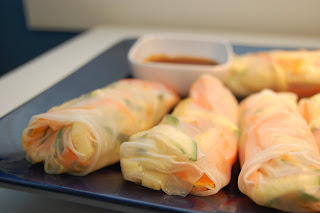 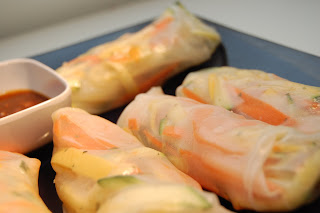 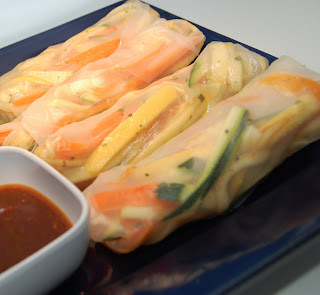 The marinade was the perfect combination of spicy, salty and even slightly sweet from the peanut butter and plum sauce. This was the perfect light snacky type of dinner for the evening.

This morning I woke up around 7 again. I knew I shouldn't go out and run, but it was tempting. It was barely 70 degrees, sunny, and low humidity. But, I took myself to the gym instead. I did a similar workout as last Sunday going with shoulders, back, and light legs. I did upper body as 3x8.

I did some ab work then stretched really well. Surprisingly enough, only my hip flexors are a little tight from yesterday's long run. I won't complain.


Lazy, Productive, & "Tuna" Tacos
After the gym, I headed to the grocery store, then home for some pool time. Today it was not interrupted by rain. The pool was actually really cold after all the rain and lowered temps over the past week. It was kind of nice not having to add water to the pool just to make it comfortable. But you did have that initial, holy shit this is cold reaction ;-)

We had a really good, fairly lazy, but also productive day. Got laundry done, did some rearranging (always makes me feel good), decluttered, etc. Dinner is where we decided to get complicated. It's funny that Jason always talks about me getting too complicated in the kitchen, overthinking meals. He's just as bad, trust me. And it's even worse when we work together.

A few years back, we found some vegetarian/vegan "fish" products while on vacation in Daytona Beach, FL. We didn't remember the brand, and never found anything similar. Until recently that is. I found a "tuna" steak made by Yves (would link but they don't have it on their site).

We decided to give it a try tonight. Originally, I had suggested putting it with a grilled veggie salad. But it go more complicated than that. We ended up making "Fish" tacos with spicy black beans and a spicy veggie salad.

I cooked the "tuna" steaks mostly according to the directions but only used half the sauce (it had a very Asian undertone). I made an easy salsa with tomato, jalapeno, red and green onion, garlic, salt, pepper, and lemon juice.

For the beans, we cooked down black beans with cilantro, garlic, salt, pepper, cumin, red pepper, I pretty much used the same spices for the veggies (leftovers from last night: shredded carrot, zucchini, squash and orange bell peppers).

I did lightly brown the whole-wheat wraps before filling them with chopped lettuce, the "tuna" and fresh salsa. On the side was the black beans with sprinkle of Daiya and veggies over lettuce. 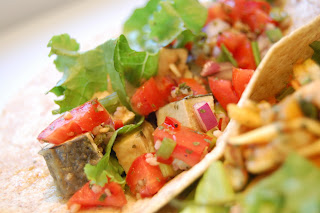 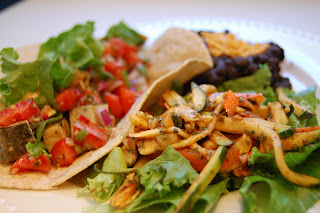 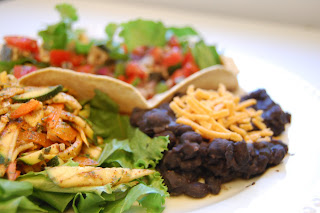 Don't ask me if this tasted like a fish taco or tuna or anything like that. I never had tuna other than in a can and have never had fish tacos. But, was it a good dinner? Yes.