By Heather Iacobacci-Miller August 16, 2011
Morning Run
This morning we woke up around 5:20 to get ready for a morning run. My plan was to run 6 miles. Jason was going to do 2 then bike.

Now that it's getting light so much later, I can't really get started on my run until right at 6 am. This makes me feel like I'm really crunched for time. I normally go into work at 7, but if I do 5 or 6 miles, plus the driving time to and from the Big Dam Bridge, then I don't get to work until 7:30-7:45. So I "feel" like I'm late even if I just stay later. Guess I just feel thrown off is all.

Anyway, we got going and Jason turned around at mile 1 to give himself 2 miles. He is still trying to nurse his IT band after his blow out when we were in Chicago. I definitely don't want him to be hurt, and it was so peaceful and calm that I didn't mind doing 5 solo miles really. Though, his company does make the run enjoyable as well, don't get me wrong.

It was only 70 degrees out, which felt amazing. Definitely more my running temp and my body responded accordingly. I had wanted to do a faster run, but misjudged my initial speed as I wasn't really paying attention. On my return lap is where I started to pick up my pace.

It was kind of funny because there was a group of three guys that were doing some intervals. Of course they all passed me, but once they finished their intervals, their pace was relatively slow. So I started catching up to them. As I started closing in on them, they heard me and started to try to speed up a little. My competitive nature took over so I let them speed up then slow down a few times before taking on all three ;-) Men really hate to be passed by a woman, whether it's in a car or by foot.

I came upon another lady running solo. She was keeping a good pace, so I sort of stuck with her. But then started thinking she might think I was a weirdo for not pacing, but staying fairly close. I know that can annoy me. So I did end up passing her, which also helped to push me to run a bit faster. Now if only I could have done the whole distance at that faster pace.

I feel like my pace has slowed down to a snails crawl since my half training. I really need to figure out a plan of attack to increase my speed. I guess I need to really start planning out runs not just in terms of distance but intervals, pick ups, hill repeats. How often do you add in speed work? Only when training for a race or do you have a plan of attack for maintaining speed?

Weights
During lunch, I did the weights I was going to do yesterday: biceps, triceps, abs. I had planned on just doing 3 different supersets, but changed my mind last minute. I have been feeling really stagnant in my weight workouts, so I decided to change it up today.

I chose 3 exercises per muscle group. I did 2 sets of supersets followed by drop sets.

I finished up with abs from Cathe's Power Hour DVD. I definitely felt the dropsets and struggled to finish all the reps, especially with biceps. So this was a good change up for me.

I really am not feeling terribly creative in the kitchen this week. Maybe my weekend cooking took it out of me. We have lots of fresh veggies screaming to be used. I decided to go with a simple Balsamic DijonVeggie Pasta Salad, mostly because Jason said that sounded good. Oh, and I figured it'd be fairly easy to make.

Directions:
To make the dressing, whisk together balsamic vinegar, OJ, mustard, agave, and spices and set aside.

Add in the tomatoes, artichokes, peas, and chickpeas to a large mixing bowl.

Steam your broccoli pour over the veggies.

Cook pasta according to package directions and transfer to bowl with veggies and toss. The heat will help thaw the peas. Pour dressing over the pasta and veggies and toss well. As an option, you can also add in nutritional yeast flakes. 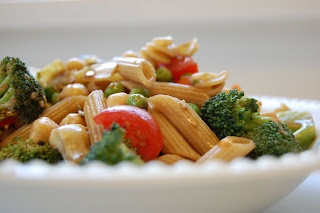 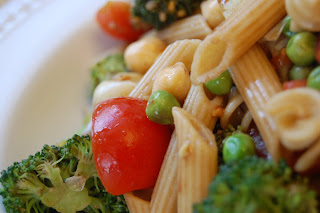 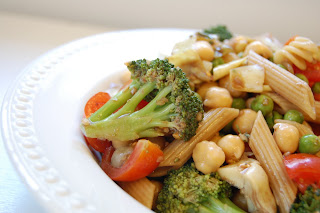 I did cook more pasta than I had intended. I have a tendency to underestimate pasta's blow up potential. But, it turned out to be a great dinner. It would be fantastic to make ahead and take for a potluck as well.