By Heather Iacobacci-Miller September 10, 2011
On Your Left 11
This morning I ended up waking up earlier than I thought I would. I really wanted to try to sleep in, you know, past 7 am. But, I didn't. And that's ok because we had a full day ahead with lots that needed to get done in the morning.

I had my route planned out better this time, so I didn't just have to guess distance based on time. When I set out for the run, it was in the low 60's, light breeze, and blue skies. Just gorgeous. I felt great getting started, settled into a nice pace pretty quickly. I was smiling and just enjoying the morning.

What I didn't realize was that there was a bike ride for Multiple Sclerosis (Bike MS) going on so I heard, "on your left," and then a group of cyclists whizzed past me. Cool, I waved and let them know I heard them and all that jazz. Then again, "on your left." Another wave. Yep, got it. I'm over to the right as far as I can go.

For the first 6 miles I started thinking my name was "On Your Left." Of course I giggled about it to myself, I was in a great, semi-giddy mood enjoying the morning. I went the same route as last week, only I followed the path farther along to add on the needed miles to get me to 11. It's kind of fun going a new route, you see new things and aren't just focused on the miles.

Jason had said he was going to ride his bike, of course, he was barely out of bed when I left. But around mile 5.5, he passed  by me. I was pretty zoned out and almost didn't even recognize him. Of course, I wasn't looking for him either. He rode by me for a few minutes just asking how it was going, then he went one way and I headed back towards my car. My car was the 7-mile mark (7.07 but who's counting), and I needed to refill my water bottle by then.

I set off to finish off my last four miles, still feeling pretty good. My left hip was starting to hurt a little bit by that point though. I just tried to change my pace a little to get out of the rut (for lack of a better explanation). That helped a little bit, but by mile 8 it was really really hurting. Thank goodness that was the only pitfall of the run or it could have turned into a shitty run quickly. But the weather was still fantastic, and I was still in a good mood.

Jason caught up with me again around mile 9 and asked how I was doing. I told him I felt like the Energizer Bunny at that point...Stttiillllll going......

Tailgating
I got home and stretched and rolled out my muscled on my Triggerpoint kit for a good 30 minutes before getting cleaned up (aka de-crusting myself). Then I had to get my rear in gear. The plan was to meet some friends to tailgate today. I had promised to bring several different dishes, and still needed to make two of them.

Last night I got a 2-Bean Salad made along with Chocolate Cupcakes with a Peanut Butter Frosting. The bean salad was super simple: black-eyed peas, chickpeas, bell peppers, onions, balsamic vinagrette, and Dijon mustard. 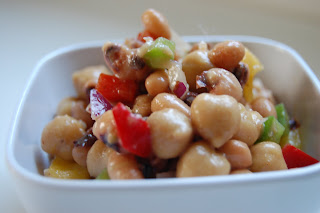 I had bought a sugar-free chocolate cake mix on clearance one day just to have on hand. So I decided to use that to make some cupcakes. I wasn't sure what frosting to do exactly. To be honest, I don't like cakes/cupcakes. But chocolate and peanut butter go hand-in-hand right? So then I started searching for an easy vegan recipe.

I remembered one I had recently seen that looked to-die for delish. So, I decided to use a Peanut Butter Frosting recipe from Kristina @ SpaBettie. It called for 3 ingredients so how could I pass up trying that one out? I will say, mine looked nothing like hers. But, it tasted good at least. 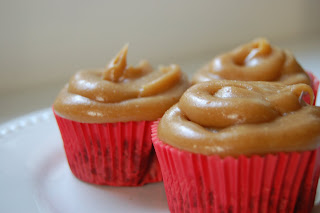 After my run this morning, I made up a quick hummus and a Curried Tahini Potato Salad. For the potato salad, I mixed together tahini, stone-ground mustard, agave, and curry powder in a large bowl. After the potatoes had boiled, I drained them and put them back in the cooking pot to cook off any additional water, then add salt, black pepper, garlic powder, and parsley to the potatoes before adding them into the tahini mixture. 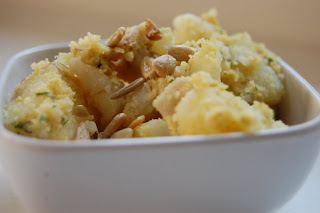 I decided they need crunch so I added in some sunflower seeds at the end. I gotta say, this turned out way better than I even expected. Not so exotic as to scare anyone, but definitely more gourmet. Jason has already put his stamp of approval on this with several helpings.

We packed everything up then headed out to the tailgate party:


We had a great time tailgating with our friends and enjoying the fantastic weather. I knew I was going to start winding down early because of the long run, so we opted against going to the game in lieu of home and PJs.