2-bean Salad with Socca on a 2-a-day Monday

By Heather Iacobacci-Miller September 12, 2011
Spinning & Running
This morning I woke up feeling a bit stuffy, then that lead into drippy. I guess weeding the yard yesterday got to me in terms of allergies. Lots of tissues being used today. I haven't decided if a runny nose is better or worse than stuffed up.

I really was feeling super lazy about working out. I should have gotten out of bed and done my 3-mile run this morning. But even at 6:15, it was still dark. I really don't feel comfortable running in my neighborhood in the dark. At least at the river trail, I know a car won't hit me.

I packed my gym bag for either a run or spin, depending on how I was feeling. I ended up decided to go with spin and promised myself I'd do the training run after work. Spin was odd today. They had cleaned the carpets over the weekend and didn't put the bikes back the way they were. It's funny how just slightly different positioning can really throw everything off. The sound system wasn't set up correctly either, so everything was just off today. I didn't even have more normal water bottle. Monday much?

But, it was still a good workout and I definitely felt more energized after class. I needed that sweatfest in a big way. Though, I will admit that it didn't leave me with much energy for the 3-mile training run I was supposed to do.

The 3-mile run was supposed to be an "easy" training run. How can I complicate easy? Many ways. Like spin at lunch and waiting until after work when it was a nice 95 degrees. I decided to just do the run in my neighborhood, so that complicated the run too - nice LONG steady incline up one of the streets.

I've definitely gotten used to running at the river trails and not having to worry with traffic. Lots of stopping at intersections and trying to get going again. I've also been enjoying longer runs and have gotten used to not really settling into the run for the first couple of miles. When you're only doing 3 miles, you've just hit your groove and it's over.

But, I'm not going to say it was a bad run. Oddly, it was a pretty good one. It also helped running through sprinklers and watching a lady play with her Doberman in the front yard. She would spray the water hose all around and the dog would jump up and about chasing after the water. Definitely gave me a chuckle.

So, despite my best attempts at making it a bad run, it wasn't so bad after all.

Easy Dinner
Since I ran after work, had to stretch, roll, and still get cleaned up, I wanted a super simple dinner. I had some leftover 2-Bean Salad I made on Saturday, so I decided to combine that with some cherry tomatoes, artichokes, and barley. I served it on top of a bed of lettuce and spinach.

For the side, I made a super simple, super tasty socca bread (thank you for the reminder Sarena!). I followed my friend Sarena's suggested recipe of equal parts water and chickpea flour then seasoned with salt, pepper, garlic powder, oregano, parsley, and finely diced up sundried tomatoes. 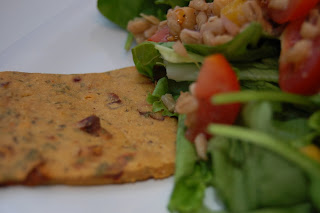 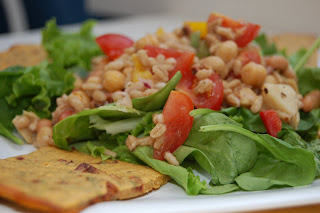 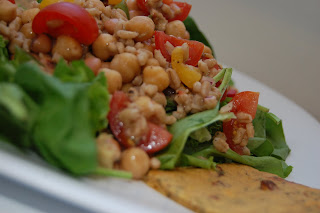 This turned out to be a really nice leftover meal I must say. It didn't feel like boring leftovers at all. Of course, it was slightly re-purposed. (Missy, I hope this was ok for the Monday we've had ;-) )