By Heather Iacobacci-Miller September 20, 2011
Running
Well, I was all over the place with figuring out the workout plan for today. I had a 4 mile run scheduled (according to the half training plan). Well, it should have been yesterday, but since that didn't happen, it was moved to today.

I also wanted to get in triceps and abs, or maybe biceps/triceps/abs along with the run. I had thought that maybe I'd do weights at lunch then the run after work. Then I changed my mind and decided to run at lunch then do weights after work. Does this count as being flexible or just wishy washy?

Either way, I got in a pretty quick 4.75 mile run during lunch. Yes, I know I was only supposed to do 4, but I just couldn't resist going through the part of the path that takes you through the shaded, wooded area. It's really like running through the forest. The temps were in the low 70's, but the humidity was up there today. Thankfully, there was a nice breeze coming off the river that helped tremendously.

I did push myself a little harder today, but it felt good for the most part. The only problem was another bloody toe incident from toenail cutting into another toe. I am convinced one toenail grows faster than all others, because it's always the same nail doing the damage.


Lifting
After work, I got in biceps/triceps and a short ab workout. I went with giant sets once again. I like the burn you get from doing the exercises for a muscle group back-to-back. However, I'm not sure it's really giving me any strength gains. I did 3x8 unless noted and increased the weights by 1# each dumbbell for biceps.

For abs, I went with the ab section from Cathe's High Reps DVD using 1# weighted gloves to add resistance.

I must say, there was a HUGE part of me that wanted to skip the workout. It wasn't even a long one, it was just mustering up the energy to get started. I don't want to harp on it because that would just get old and annoying, but I'm starting to feel spread thin with trying to get in all the workouts I want to do. I think I might be getting into one of those workout ruts too. Time to refocus and change things up.


Still Grilling Weather
Because I was fairly worn out, I wanted dinner to be easy tonight. I had some homemade seitan cutlets in the freezer. I decided to pull those out and grill them (just basting in BBQ sauce) along with sweet potatoes and broccoli. I feel like I really should get in any and all grilling I can before the evenings are too chilly. Right now it's almost perfect grilling weather because you aren't sweltering standing near the grill.

Jason wanted me to try something different with the sweet potatoes. Our neighbor (I think that's who it was) was saying that he microwaves them first, then cuts them in half and grills them. So, I thought I'd give it a shot.

I microwaved the sweet potatoes for about 8 minutes (the ends were soft so this may have been too long; I was just guessing). I normally don't put any oil on my veggies to grill, but I did brush the insides with just a smidge of olive oil and very lightly sprinkled with sea salt. I grilled face-side down for about 15 minutes or so then flipped them and grilled until they were soft. 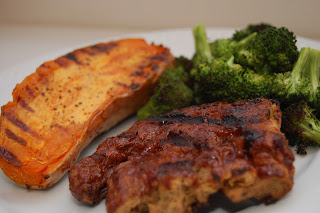 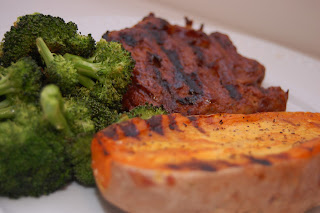 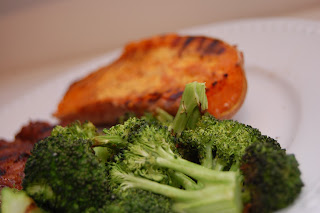 The sweet potatoes turned out really great. They were better than baked as they had the nice grilled flavor. Perfect grilled out dinner.